Your COTW in the moment, but first: I want to share some very special fan art I received from faithful reader Brenda Starr Destroyer!

The third panel of today’s A3G was so goddamn amazing that I was inspired to make countless exciting animated GIFs of it, but I am too lazy and suck at computers. So instead I made some MS Paint drawings, and you can imagine that they are fun and stimulating, or you can try dropping acid. 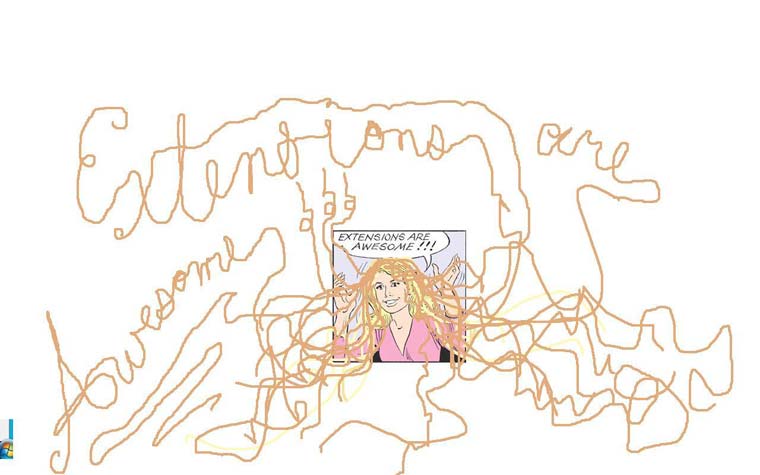 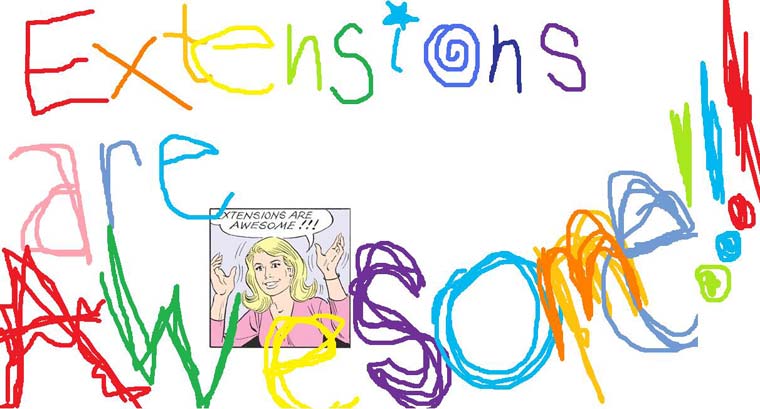 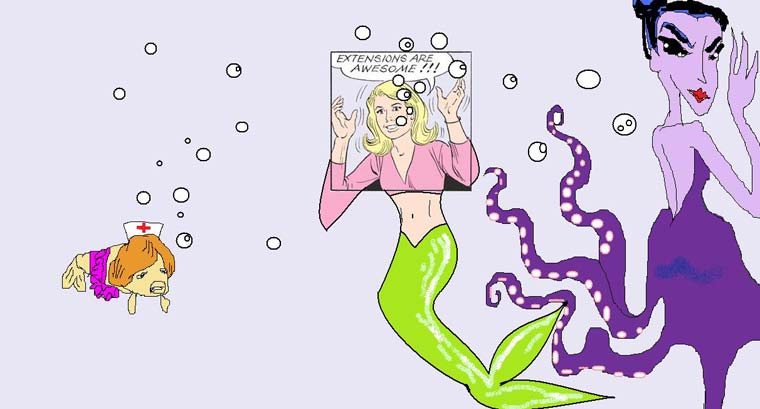 Brenda Starr Destroyer went on to note that “the line, ‘Extensions are AWESOME!!!’ in a cartoon should be followed by a reveal of hilariously extreme hair, preferably of a completely different race or age.” Sadly, until the wrong is righted, we only have these hilarious/horrifying MS Paint drawings console us.

“I have just made sense of Dick Tracy. Absinthe time!” –Uncle Lumpy

“Shoe: ‘Oh, dear god in heaven! He … he used a word in a secondary sense which actually — choke – means something a bit different from what I may have first expected! It’s like my whole psychic universe is crumbling to bits, making me crave the cool serenity of the gra… we’re done? Okay, paycheck here I come.'” –[Old Man] Muffaroo

“Rustina’s eyes are drawn so she appears to be looking down (cross-eyed down, in fact). Is she some sort of misshapen gigantress who could easily put an end to this whole plotline by dropping some size 165EEEEEEEs on the wicked caged-animal hunters? And maybe the giant deer behind her will cap it all off by turning around and dropping some deer-do the size of a Dodge Neon on the evil men while Mark Trail just watches from his hill camp in amazement.” –Apeman

“My spider-sense is tingling like mad! Well, if there’s any danger, at least I’m here in a comfy seat with nachos, not out there with all that danger. Excelsior!” –Ed Dravecky

“This is interesting, today, to me, because when my wife went to look at wedding dresses, she was also carrying her own personal bar of soap.” –Little A.

“If you scroll the Mark Trail panel just enough to cut off the top, you get a terrified little girl screaming ‘Kill the animals — PLEASE!’ as she’s being pursued by an eyeless Deadite fawn, and MT becomes the most awesome strip in newspapers. Like most things in life, fixing comics is easy as long as you know where to slice.” –Vermic

And let’s just take a time out here for some more fan art! Because faithful reader Annie had the same thought upon seeing this panel, and sent in a screenshot: 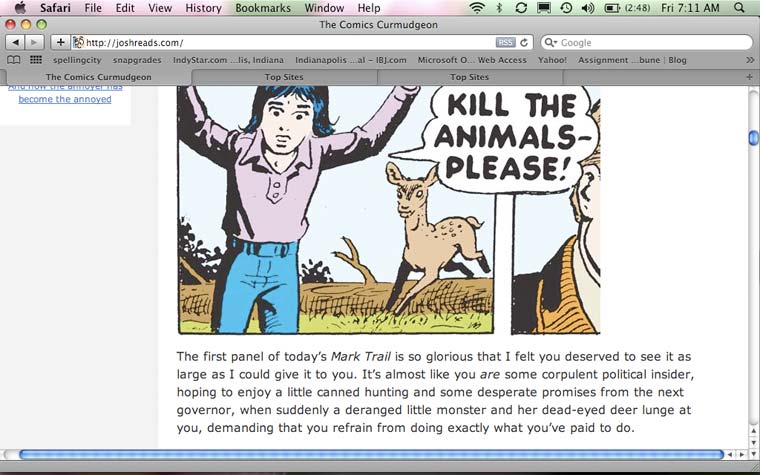 Uncanny, no? And now, back to the runners up:

“Lu Ann isn’t just happy — she’s jazz-hands happy, and Margo’s coquettish glance in Panel 1 tells me she more than a little pleased to have the old Lu Ann back. Somebody’s going to get bathroomed tonight, and how!” –A Shadowy Figure Fleetingly Glimpsed from the Corner of Your Eye

“I’m pretty sure that last panel is supposed to say ‘amphetamines,’ not ‘extensions.'” –Violet

“I haven’t really been following Mary Worth. Is it a story point that Jill is eight feet tall? Or is she just drawn that way for the hell of it?” –AndyL

“Panel 3 of Apartment 3-G will soon be used in an ad for a penis-enlargement device in the back pages of an alternative newspaper.” –Pozzo

“COME ON SENATOR, IT WILL MAKE A GOOD MEAL FOR DINNER TONIGHT, OR MAYBE YOU CAN CURE IT AND PRESERVE IT FOR A SNACK FOR SOME TIME YET TO BE DETERMINED, OR MAYBE YOU JUST CUT OFF ITS TINY HEAD AND MOUNT IT ON YOUR WALL AND FEEL REALLY GREAT ABOUT YOURSELF, so uh anyway, who do you like in the gubernatorial primaries?” –Maggie

“Note the difference between their ages. A jail-‘bait’ pun beckons — but, like the Sirens, remains tantalizingly out of reach.” –Spiny Norman

“I see that Mark Trail was once a wildlife photographer, and is now the Prince of Persia.” –Rumon

“Now I want everyone in class to know that the most important rule of handling firearms is to never, ever stop aiming them no matter the circumstances, especially if you suddenly have reservations about shooting things to the point that you’re shouting them at the top of your lungs. That’s how they get you, kids. That’s how they get you.” –Black Drazon

“Phantom: No wonder Diana is so confident she can jet. Dudes are walking around clockin’ officers (and nobody seems to miss them), people are wandering through the prison wearing purple cowels and shit, blind spots along the fence line allow fools to decorate the barbed wire with palm leaves like he’s at a damn Minnesota tiki bar. Then he wanders BACK into the prison as if he left his wallet on somebody’s desk. Classic. If I ever go to prison I hope it’s one like that one.” –Gregory Earls