After a lunch spent mostly insulting and undermining Adrian, Jill leaves for an appointment, but the Sunday throwaway panels thoughtfully give us a glimpse of her as she walks away. Curiously, as she leaves the restaurant, her face melts from the cruel mask she’s worn throughout this episode into the dead-eyed, plump-lipped look of vagueness more typical for women in this strip. Could it be that she’s been cast into the role of emotional abuser against her will? That the masochistic Adrian pays her for the public insults and cruelty to satisfy some sick urge that her “perfect” husband-to-be Scott can’t know about? And this has been going on for months or years? No wonder she looks so exhausted in that second panel. 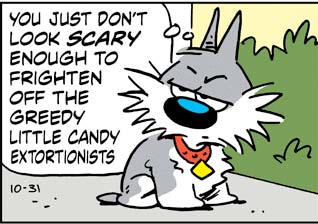 Just about all comic strip text is done on computers these days, so the strangely smaller font on “little candy extortionists” is probably just a lazy way for the artist to cram the words into the space available instead of rewriting or redrawing. Still, it does give the impression that something’s been changed at the last minute, and I sincerely hope that this word balloon originally ended in two or three of the foulest cuss words you can imagine.

The most horrifying thing any inhabitant of the Funkyverse can see is of course a member of the medical profession, since they will be spending their last agonizing months of life in a hospital, and sooner rather than later.