I love the way that Jeff’s cane looms monstrously in the foreground of the second panel here. In a carefully constructed work of visual narrative, this close-up would hold symbolic meaning, perhaps representing the way Jeff has come to rely on Mary to deal with crises in his own family; or the strange emphasis might indicate foreshadowing — perhaps setting the stage for the scene where a heavily armed Jill arrives at the wedding intent on gunning down everyone wearing clothes or carrying bouquets that don’t meet her aesthetic approval, and Jeff defeats her using only his cane as a weapon. But this is Mary Worth, so it’s probably there just because the artist likes drawing canes. And hey, let’s draw it leaning up against the wall at an impossible angle! Sure, why not?

I knew that the wonderful/horrible “Citizen Cane” gag had appeared in Mary Worth before, but I assumed that it had been Dr. Jeff’s joke all along, and that now it was a conversational crutch (ha!) that he used whenever it came up in conversation. “See, I’m not a decrepit, enfeebled old man! I’m wittily commenting on my own need for physical support when I walk! You kids today think you invented ironic distance, don’t you? Well, someday your knees will be in constant pain, and you won’t even be able to put your skinny jeans or your vintage-store corduroys on without popping a fistful of Advil first, and you’ll be proud if you come up with something as funny as ‘Citizen Cane.’ Hey! Get back here! I’m talking to you!”

But a little search through the archives shows me that the joke was actually used by Ella, who was briefly Mary’s rival for Charterstone meddling supremacy before she left for parts unknown. Which raises a host of worrying questions. Did Jeff kill Ella and steal her cane, believing it to be the source of her supernatural powers? Is “Jeff” secretly Ella, wearing a very clever disguise for terrifying and inscrutable reasons? Or is the cane itself the motive force here, possessing first Ella and then Jeff, forcing them to engage in unspeakably evil acts? 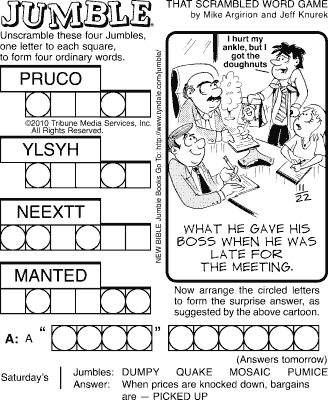 I don’t know why, but I’m kind of impressed that this Jumble office scene includes one of those weird tripodal speakerphone things that are often used to set up phone conferences, or at least were often used 10 years ago, when I last regularly participated in group calls in office conference rooms. I guess I just expect any white-collar workplace scene in the comics to be 30 years out of date at the minimum. I’m so satisfied by it that I’m not even going to pursue the whole story of how to protagonist managed to horribly injure himself getting donuts.