The duck on the left is a duly sworn officer of the law, representing a distant government in whatever isolated community he rules over at his whim with an iron fist, his tin star serving as all the excuse he needs to do and take what he wants. The duck on the right is a ruthless vigilante, answering to nobody and following only his own ethical code — and his own appetites. Can you tell the difference between the two? Are the appalling acts of violence the duck-dictator on the left perpetrates in his dusty border town justified by his government commission — or are they even less defensible as a result? By setting up on his own account, is the duck on the right arrogating power to himself that doesn’t belong to him — or is he merely replicating the process by which all governments have formed, and is perhaps prepared to do a better job than the authority he’s displacing? Also, what kind of vermin is hiding under the television set, seriously, it’s creeping me out.

I’m not sure what the point of this strip is supposed to be, but since it features the entire loathsome Marvin cast staring out at the reader in gobsmacked terror, presumably looking straight into the face of total economic catastrophe, I’m just going to go ahead and declare it the greatest Marvin of all time. 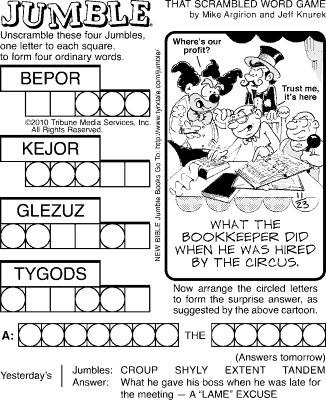 Don’t let them tell you that clowns are the heir of a long and honorable tradition of performance, or that they live only to hear the laughter of children, or any kind of bullcrap like that. They’re just in it for the money. All clowns are interested in is money.