Wow, if you had asked me which nationally syndicated comic strip would be the first to reference recent political upheaval in the Middle East, Momma would not have even made my top ten. Mother Hobbes knows that there’s nothing that scatters a group of revolutionary troublemakers like a good snowfall. She longs for the day when a great cleansing snow comes for all of us, crushing political dissent and calls for freedom under an icy, silent blanket.

It appears that Mark has been shot directly in the head, and the bullet has struck with such force that it’s knocked a few hairs out of place. He’s really going to do some serious punching, once he shakes that off. 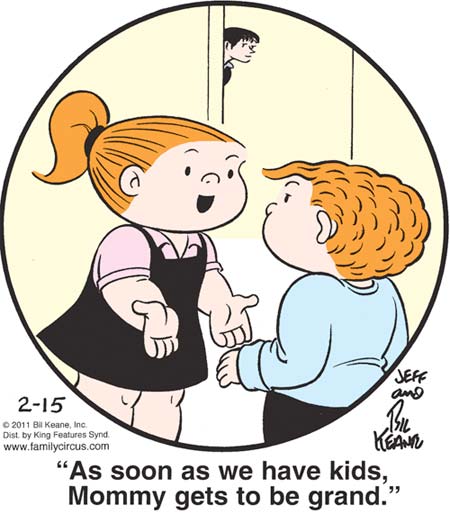 Did you look at this comic and not immediately imagine a thought balloon emerging from Mommy Keane’s head that reads “Ahh, yes, my intra-Keane breeding project is proceeding apace!” Then you are a much better person than I, my friend.

If one constructs a sexual partner out of pieces of disinterred corpses and then reanimates it using dark magic or forbidden science, does that count as necrophilia? Discuss.