Wow, do you realize that I haven’t talked about Dick Tracy’s plot in more than 10 weeks? Here’s the sum total of what’s happened in that time: it rained, Dick and his prisoner ended up in abandoned granary, and his prisoner wormed his way out of his chains. That’s it! Of course, this is Dick Tracy, so this action consisted of the same semi-comprehensible catchphrases repeated over and over again and herky-jerky chronology. I assumed, naturally, that all this action took place over about 20 minutes, but apparently it’s been going on for more than a day. It’s possible that all this crazy madness is a hallucination brought on by Dick’s sleep deprivation, but that doesn’t explain the last 40 years or so of what’s gone on in this strip. 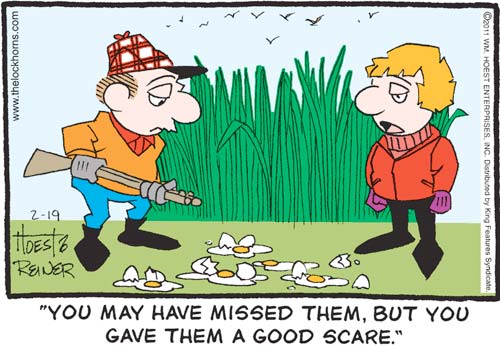 Ha ha, so yes, it seems that you can get away with “shitting oneself in fear” jokes in a family newspaper so long as the terrified being is a bird and they poop out eggs instead of poop. I pass over this quickly, pausing only to pray that the people at Shoe don’t get wind of this, because I’m much more interested in why Loretta is out on this hunting expedition with Leroy despite not toting any firearm of her own. Presumably she’s not actually interested in shooting at birds and mostly wanted to wait for Leroy to fail so she could sigh out some heavy-lidded sarcastic rejoinder. So don’t put too much stock in her glum expression; she’s been waiting for this moment, squatting in a duck blind all the while, for hours.