Now, I know you people, and a lot of you are going to read this and be all like “Ha, Sam and Angel are going to be go on a gay date, and ‘preferring jazz to musical theater’ is code for being on the down low, etc., etc., hardy har har.” Which just goes to show that you don’t know Sam Driver, at all. Sam doesn’t enjoy physical and emotional intimacy with other human beings, like normal people do; Sam only gets off on denying others his sexual favors. Bored with only spurning women, he’s taking the first tentative steps towards breaking male hearts as well.

I am enjoying the work of the new Dick Tracy artists! The previous regime, of course, focused on a series of villains who were hideously deformed; the new guys are branching out to people who also emit some kind of horrible odor as well.

Nice try, buddy! Everyone knows that hobos and tramps are entirely different categories of itinerants (the classic dichotomy being that hobos work odd jobs when they can while tramps beg). So why don’t you stop playing coy and admit that you’re a Russian Grand Duke or something who doesn’t like to shave or buy new clothes, and skip ahead to the part where you whisk Iris away to your villa on the Côte d’Azur. 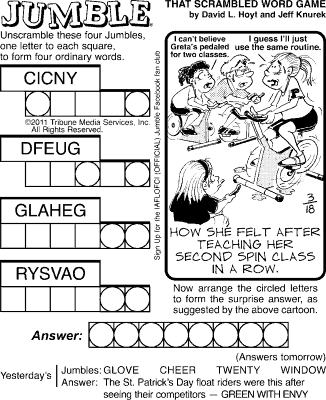 True story: Up until fairly recently, I thought that a “spin class” involved spinning around in circles, and couldn’t figure out why everyone seemed to think they were so difficult! Ha ha, isn’t that funny? Anyway, apparently they actually consist of working out really intensely on stationary bicycles, which explains why the nameless protagonist in this panel appears to be experiencing some sort of massive cardiac event.