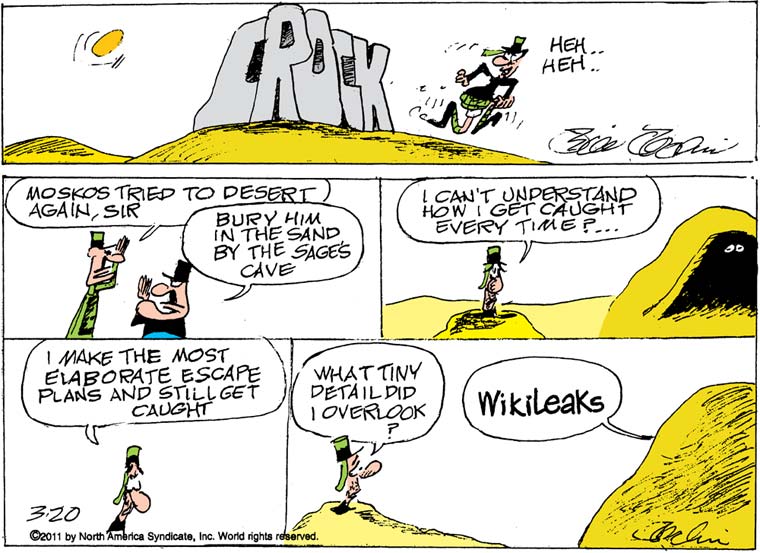 One way to tell when something has been a well-understood facet of mainstream world culture for at least a year or so is that weird, fumbling, semi-coherent references to it start appearing in legacy comic strips. One thing I find interesting about both this reference to WikiLeaks and the one that appeared a a couple months ago in Marvin (beaten to the punch by Marvin! the shame!) is that the word in both cases is rendered in both small and capital letters, in contrast with the standard all-caps orthography. This just draws attention to the word in a sort of “Hey, look at us, bein’ topical!” sense, with a negative effect on the overall humorousness of the strip (though of course even without the typeface issues that, “humorousness” could only be detected with the most delicate scientific instruments). It’s as if the authors, barely understanding who or what a “WikiLeaks” might be, are convinced that the internal capitalization is crucial to the word’s totemic power and must be preserved at all costs, when in fact it’s just an irritating legacy that’s trickled down from late ’90s branding practices in the high tech industry.

Speaking of trickling down, though, while Crock lost to Marvin in the “making a stupid joke about WikiLeaks” race, at least Crock’s stupid joke isn’t about pissing oneself.

Ha ha, just another day in the Funkyverse! “I experienced a brief moment of triumph! But now the physical and emotional agony that is my life has come to the fore once again. You can’t win your way out of suffering!”