I’ll say this for the Phantom: Whatever its questionable history of depictions of Africans decades ago (a little digging will find you some howlers), the current version of the strip makes a reasonable attempt to accurately depict a post-colonial African state. Today’s strips neatly encapsulates the tension between the multiple sources of identity that can compete for the loyalty of citizens of such nations. Most residents of Bangalla probably aren’t more than a generation or two removed from their ancestral villages, where ties of clan and tribe are paramount; yet many of the young have moved to the modern capital of Mawitaan, where they’ve mingled with people from other parts of their country, and have perhaps begun to see themselves more as citizens of Bangalla than anything else. Which I imagine might cause problems for this whole Chatu-wrangling thing. “Wait, you want us to come home and do what now? Uh, yeah, see, we have this nice construction gig thing going here … cool shared apartment down on the lower East side, near some decent Bandar restaurants … why are you guys running a prison anyway? Don’t we pay taxes to the Bangallan government to run a prison system? Oh yeah, that’s right, you don’t participate in the whole monetary economy thing. Well, anyway, I think we’re going to stick around in the city for a while, but thanks for asking! Say hi to Grandpa for us!”

Oh, that wacky Herb and Jamaal, unable to bring itself to use such specific terms as “GI Joe” or “soldier”! But this zaniness masks the important issue here: If the information I’m getting from Funky Winkerbean is correct, Herb’s GI Dude will be suffering from PTSD after years left abandoned in that box. 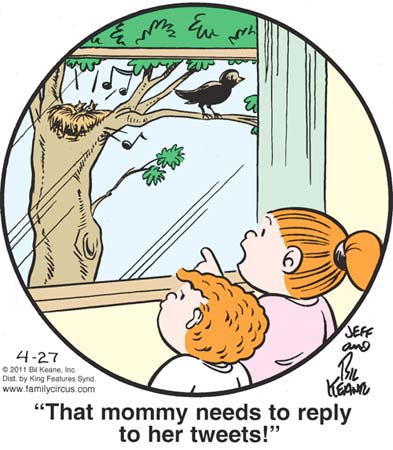 “Just like all the messages we send to Mommy on Twitter begging her to love us! They never work either.”