Abandoned by her roommates, Margo is forced to bathroom on her own! That’s kind of an oddly drawn toilet brush; at first glance, I thought it might be some sort of archaic feathery masturbatory aid, but surely Margo is far too self-actualized to refer to self-pleasure as “dirty work.” Anyway, whether we’re talking cleaning the commode or rubbing one out, Margo doesn’t need to do it because Trey’s shown up. Have fun, Trey! Hope you don’t have to go to the bathroom, I hear it’s gross.

The Mark Trail drug-smuggling plot has ended rather anticlimactically, with Mark guiding his stolen plane to a nearby commercial airport, dropping off his escapee passengers, and he idle small talk with his government handler, who I assume had written him off for dead weeks ago. “Oh, hey,” he remarks casually, “there’s an island within a day’s boat-drift of U.S. soil where a narcotics kingpin rules with an iron fist and keeps people as slaves. You might want to look into that or whatever.”

I also look forward to the confused encounter between Lonnie and the Coast Guard that will result from Mark’s brush-off in panel two. “Your family? Uh … do they live near a coast?” 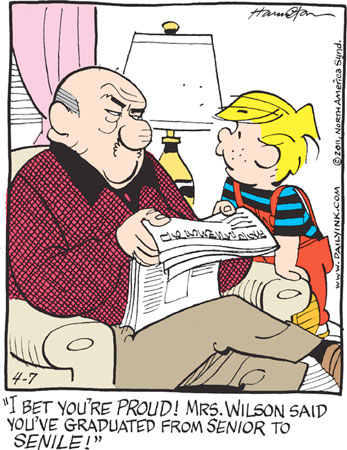 Ha ha, this is exactly the sort of thing that would normally send Mr. Wilson into a rage! But his pupils are invisible because his eyes are rolled back behind his drooping eyelids, indicating that he’s been in a dissociated state for hours. If Mrs. Wilson wants to call that “senility,” that’s fine, I guess; whatever keeps him out of her hair, amiright?