I’m sorry to say that the current Dick Tracy plot is kind of OK on atmospherics but in general low on overall insanity. Isn’t Dick Tracy supposed to be some high-grade supercop? Doesn’t having him chase after cocaine smugglers seem like a waste of his talents? But maybe fate has conspired to bring him in contact with the Plentys’ monstrous baby, seen here in the background using its inhuman strength to cause its father permanent brain damage. If there’s any character in the comics pages who’d be willing to kill a baby that needs killing, it’s Dick Tracy. 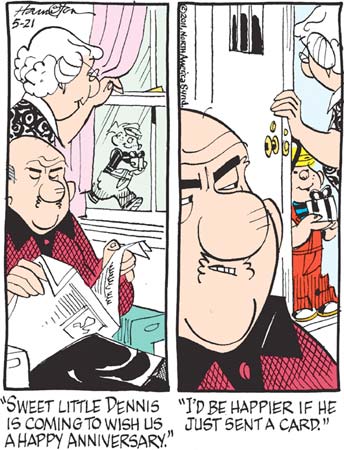 One of the more jarring and hilarious things about Dennis’s ongoing de-Menacification is that Mr. Wilson’s contempt and loathing for him has been ratcheted back not at all, making him less a put-upon elderly gent and more a hateful sociopath. Today provides a particularly laughable example. “He’s bringing over a neatly wrapped anniversary present for us? HOW DARE HE!!!!”

You guys, can you seriously doubt that Marmaduke is the most terrifying kind of demon? He has literally stolen something from God and refuses to give it back! HIS POWERS ARE UNFATHOMABLE! No wonder the other dogs surround him in a worshipful pose.