A linguistic phenomenon I’ve always found quite interesting is the so-called euphemism treadmill, a process by which taboo concepts are denoted by euphemistic phrases that eventually become so strongly associated with the taboo concept that they lose their euphemistic quality, which means that a new euphemism is required. Take the phrase “toilet paper,” for instance. “Toilet” is itself a euphemism — it originally referred to a lady’s dressing table, and thus was used obliquely to refer to other things that might go on in a room where the lady dresses. Now, of course, the word is intrinsically associated with a porcelain bowl that you poop and pee into, so we need new ways to talk around it. Thus we now have “bathroom tissue,” or, as the sign I noticed in the supermarket today would have it, “bath tissue,” a phrase that would make zero sense out of cultural context because, really, who would use a tissue in the bath? It would get all soggy and clumpy! While this is a topic I’m interested in, this has all largely been an attempt on my part to ignore the fact that today’s Crankshaft features the strip’s title character complaining about the chafing on his tender anus, but I’m going to have to admit to myself now that this attempt has not worked out. 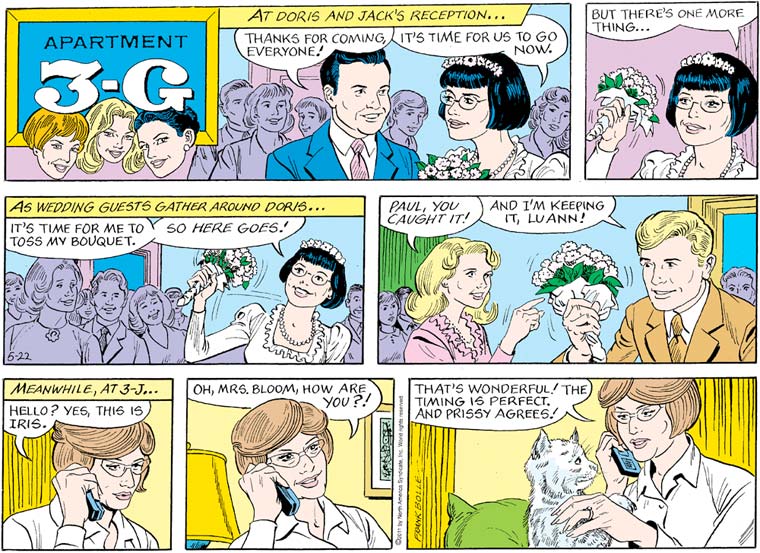 As usual, the Sunday A3G offers no new plot information, but does provide a slightly different take on the week’s events. Surely we’re all glad to have seen the fourth panel here, in which a wild-eyed Paul holds the bouquet in a strangling grip and proclaims his intention to take it to his grave.