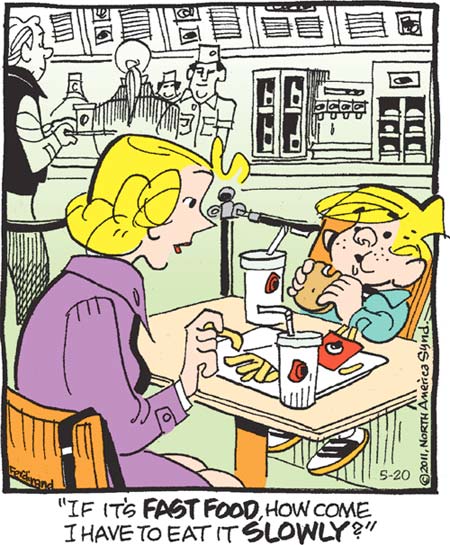 Ha ha, Dennis knows the score! “Mom, this $2 patty of Grade F meat smeared with American cheese and non-fancy ketchup certainly isn’t anything that would be improved if I savored it. You’re supposed to wolf it down as fast as you can so the fat triggers all the pleasure centers in your brain extra hard! That’s what it’s for!”

I honestly have no idea what eerie bouquet-holding superstition Paul’s mom might be referring to, but that makes me as dumb as Lu Ann, so I’m going to not think about it and instead admit that I’m also not sure why exactly Paul’s mom is so keen to take pictures of our happy couple. I guess it could be because they’re supposed to be all dressed up for the wedding, but Paul is wearing a suit and tie, just like all men in the A3Giverse do constantly, and Lu Ann’s hideous bridesmaid’s dress in completely invisible under her all-encompassing coat. (That coat, by the way, is an instance of this strip accidentally depicting a garment that a young person in New York in 2011 might actually wear, although Lu Ann doesn’t seem like the spend-too-much-at-a-vintage-clothing-store-in-Park-Slope type.)

Five years ago, Slim tried and failed to feed his grandson to the bears. He’s not going to let another opportunity slip through his fingers!