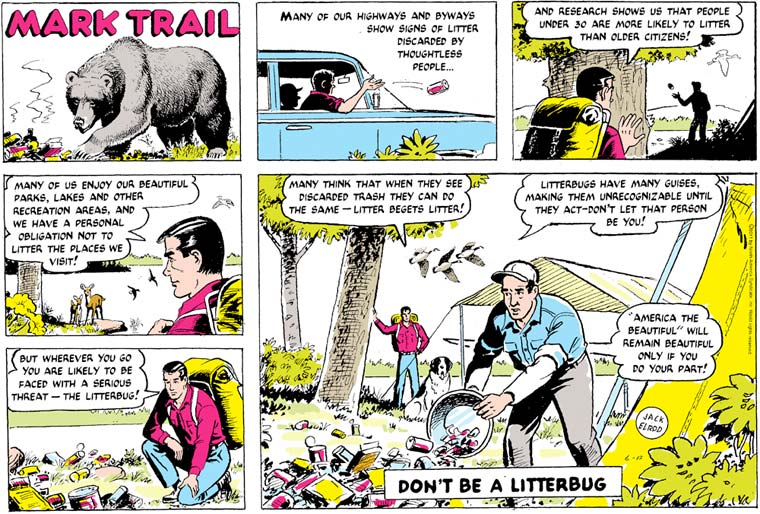 Do you hear that, Young People? Mark Trail is on to you, and your inveterate littering. And he has hard data proving that today’s kids are the worst, supplied by independent scientific researchers who were not at all biased by the massive grant that they received from the Foundation For Extolling The Virtues Of The Elderly And Demonizing Anyone Born After 1968. Why, look at that young punk in the final panel, who, following the latest hip youth craze that he got from the Internet or FM radio or whatever, has driven out the forest just so he can dump garbage everywhere. Fortunately for justice, Mark learned from yesterday’s strip how to impale a man with a word balloon, and so that pile of trash will be the last thing this miscreant ever sees. 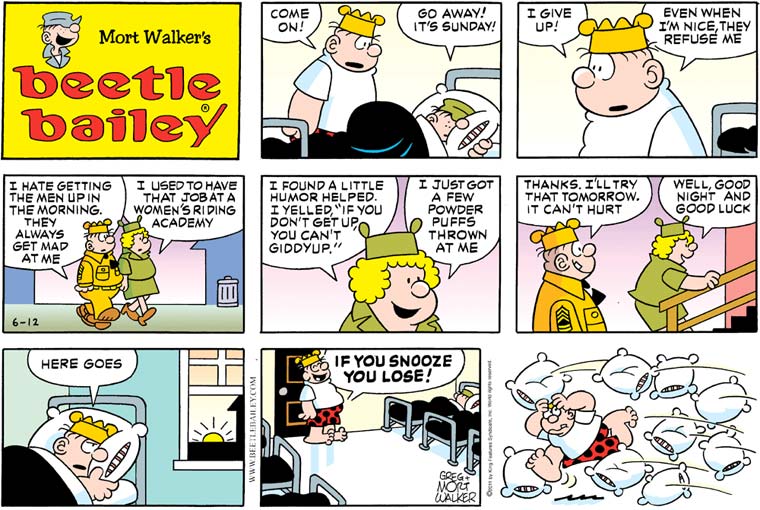 The throwaway panels from today’s strip contain material for a cheap “Beetle refuses to submit to Sarge’s advances on the Lord’s Day” joke, but I’m more intrigued by the action in the main sequence of the strip. Sgt. Lugg’s advice that Sarge use “a little humor” has failed spectacularly, mostly because Sarge, inhabiting as he does the laffs-free Beetle Bailey universe, has no idea what “humor” could possibly be like.

Oh, look, Crankshaft is an architectural critic now! Note the use of italics: Crankshaft the strip is cracking wise about post-modernist architecture; Crankshaft the character is just sitting sullenly on the couch watching the television trash Frank Gehry. Because much as the strip’s creators might want to criticize Gehry’s work, they realize that Crankshaft having an opinion that couldn’t be expressed as some wildly inappropriate pun would be way too out of character for the readers to handle.