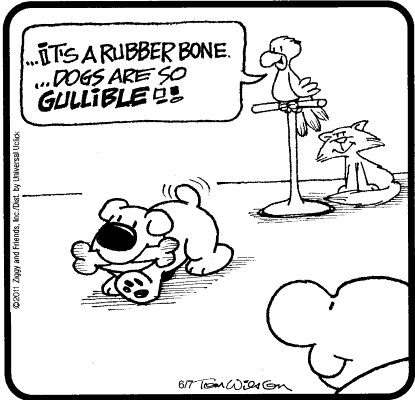 One of the most shameful moments in the life of any social reject comes when they’re offered the chance to join in on the mockery of someone even lower on the ladder than they are. You might imagine yourself a noble defender of nerd solidarity, but too often, after years of feeling the brunt of teasing and cruelty, the opportunity to step to the other side of the social predator/prey line and feel cool, if only for an instant, is too tempting to resist. If you have shred of humanity, you’re haunted by it later — certainly I am, for the few times I briefly switched teams in my dorky adolescence — but I imagine it’s a pretty universal phenomenon.

I bring this up because Ziggy, who is usually the butt of cruel jibes from his various pets, seems to be enjoying the fact that his vicious parrot is mocking the dog, for once. Ziggy, they’ll never accept you. Try to maintain a little dignity!

Hagar the Horrible is one of the most violent strips on the comics page, but I’m pretty sure it’s never depicted an actual corpse before. It’s possible that the poor nameless viking’s awful staring eye isn’t frozen open in death, but merely indicative of the shock he’s entered as a result of his massive and almost certainly fatal wounds, but either way this seems especially grim.

This is happiest we’ve seen Funky in years. Naturally, it’s because multiple people that he ostensibly cares about are in painful emotional turmoil. 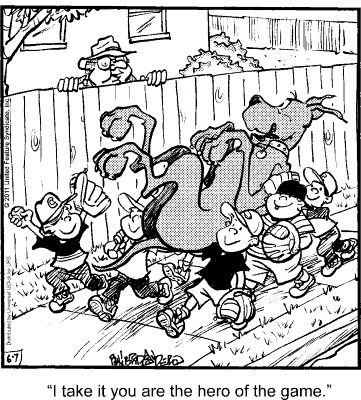 Marmaduke was the hero of the game, presumably because he ate all the children on the other team.