You might have doubts that Plato, Camp Swampy’s resident braniac, would pass his time reading the bluntly named Weird Stuff. But at least he’s leagues ahead of Beetle, who apparently isn’t intellectually equipped to deal with words or even pictures and is instead just perusing some publication that consists entirely of colored squares arranged in simple patterns. “Ooh, it’s the red-yellow issue!”

What are we to make of the fact that a host of mosquitos buzz into this strip only after we learn that Eliviney has doused herself with some dubious home-made insect repellent? It could be that we’re supposed to believe that this homemade Off knockoff is of such low quality that it actually attracts bugs; however, I prefer to think that Hootin’ Holler, among all of its other well-known negative qualities, is permanently afflicted by thousands of mosquitos, whose presence we normally aren’t privy to because they’d be tedious to draw. Panel two shows us the hellish bug-world in which the characters live at all times, just to emphasize why extreme measures of homemade chemistry are necessary in this case. 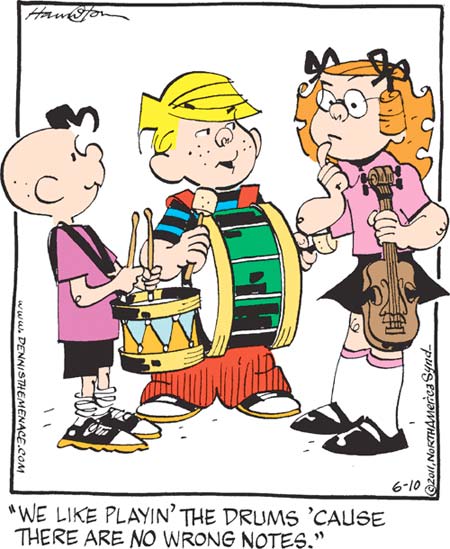 Dennis and Joey are already gravitating towards activities that compensate for their lack of skills. I guess having low expectations for yourself is kind of menacing?