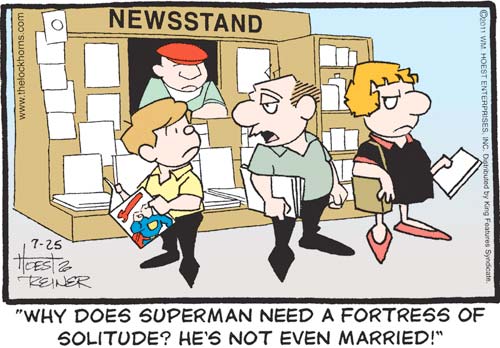 I am absolutely in love with the enormous frown on the kid’s face in this panel. It’s like, he’s just gone down to the newsstand to buy the latest Superman comic (because like all of today’s youth he loves twee retro affectations). He didn’t expect to be harassed by some squat middle-aged stranger. Certainly he didn’t expect to be offered an observation so dense with emotional anguish and post-love ennui; he’s far too young to really understand it, but he feels the pain of it flowing out of Leroy and crashing over him in waves. He’s going home a changed person, and he’s going to be looking in his funnybooks for the real stories, the stories about what makes people human (hint: it’s suffering).

Once again, Slylock proves that he simply can’t stop with the sleuthing after tiny clues, even when it isn’t necessary. I’ll bet he makes the poor techs down at the CSI lab work for days with him on figuring out the make of the tires that left those treads in the concrete before finally admitting that he also has access to the perp’s license plate, which they could connect to his registration and home address by spending about thirty seconds in front of the computer. I’m less interested in his sad and increasingly desperate little game than I am in the nattily attired duck standing on the corner. While everyone else in the neighborhood appears traumatized by the reign of automotive terror that just blew through the subdivision, he just stares forward with big, soulless eyes, like he’s a jarring minor character from a David Lynch film.