OMG SCOTT GAINES! Despite the fact that I sneer at the oppressive nostalgia that lies over the newspaper comics industry like a suffocating blanket, I admit that I love it when the soap strips bring back beloved minor characters from the past. Scott Gaines was briefly engaged to Lu Ann; they met when he was pretending to be a janitor, but then she found out that he was cartoonishly rich. They broke up for some boring reason I forget now; later, Margo, during her brief stint as a wedding planner, took on Nina Blake, whose savagery she found pleasing, as a client; it turned out Nina was marrying Scott, who got cold feet but then agreed to marry her because Margo berated and humiliated him. So I guess now our gal Magee is hitting up the two of them for money? We should be in for serious fun times! 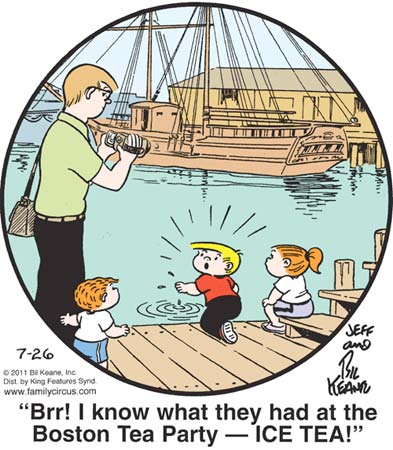 Ha ha, Billy, you really shouldn’t let Boston Harbor touch your skin! What you’re feeling isn’t so much cold as numbness; the various pollutants are destroying your nerve cells as they rapidly eat through your flesh.

This whole plot in Judge Parker — involving as it has Jackie Thornton the man-eating marketing director getting hit by a bus and replaced by her college-age intern who then took Judge Parker Emeritus to see a play but then brought him up a secret passage to the roof where they found a beautiful defense contractor about to kill herself but then Judge Parker talked her out of it except he was accidentally knocked off the roof by the cops but it’s OK he’s totally fine oh and also some mysterious neighbor filmed the whole thing and live-streamed it to millions across the Internet, making him a national hero and his book an instant best-seller — has seemed so ludicrous and contrived, even by the standards of this strip, that many of you have believed quite earnestly that there must be a more rational explanation. Several have suggested that perhaps the whole thing was a set-up, arranged in advance by Constance and Jackie, with Constance playing the suicidal lady and the Internet live-streaming arranged in advance, all to drum up publicity for the Judge’s latest unreadable book.

But as the strip wraps things up, it’s beginning to look like there’s exactly as much here as meets the eye. Today, Judge Parker gives Constance an important lesson in being a character in the comic strip that bears his name: if someone dies and thus makes your already extremely comfortable life even better, you don’t worry about them; you just lay back smugly and enjoy it. Hopefully he’ll soon call in a woman to give her another important lesson that Judge Parker characters need, if they’re female: How to sit down in insanely tight dresses.

So, as was in retrospect fairly obvious, the whole “Marvin gets a brother” subplot in Marvin turned out to be just a dream sequence. Now we’re back to the strip’s sad reality, starring Bernie as a shameless pill addict.

Having successfully fended off another painfully awkward marriage proposal from Dr. Jeff, Mary heads off to lunch in triumph. “Yes, table for one, please. Table for one … forever.”