Wow, thanks to the Pluggers comic for keeping me up to date on important plugger anthropological developments! If you had asked me before I saw this comic, I would have guessed that a “plugger coffeehouse” was one of those greasy-spoon diners where you can sit at a counter and a waitress will call you “hon” and fill up your mug limitlessly for a quarter. But no, all of those went out of business years ago, obviously, so pluggers just drive out to the McDonald’s on State Route 178 to drink their coffee. They may not get free refills but at least they aren’t going to menaced by any fruity poetry.

But pluggers may need to brush up on their own cultural awareness! Because, based on this comic, I’m guessing that they assume that non-plugger Americans get their java in ill-lit bohemian hideaways, where bearded Communists read slam poetry on stage while the assembled patrons snap their approval. In actuality, of course, non-pluggers get their coffee at Starbucks. Can’t we as a nation come together and bond over our love of soulless chain restaurants, even if they aren’t the same soulless chain restaurants? 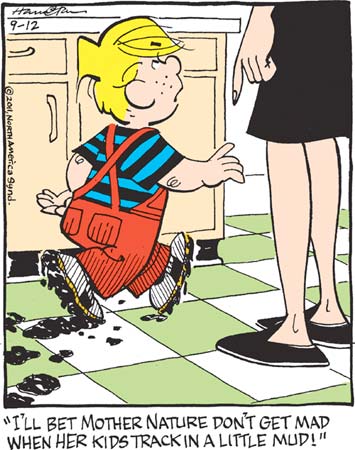 So, uh, Dennis wishes his mother were some kind of pagan nature deity? This is either not menacing at all (i.e., Dennis is into twee neo-pagan spirituality, with, like, faeries and stuff) or extremely menacing (i.e., Dennis yearns for a divine lineage so that he might be imbued with God-like powers and indulge his every whim, to our terror).

Whoah, it looks like Marvin and his cat have turned to high-priced lawyers in their battle over pooping rights. Can you believe that they’ve gotten so corporate? I remember when it was about the shitting, man.