“Sam, you and I both know that a ‘gift’ involves emotional entanglement and webs of obligations, which I have no interest in. This is strictly a commercial transaction! Derek has been contracted to teach me about sex, and guitar playing; the latter, I’m given to understand, can be parlayed to obtain additional sex.” 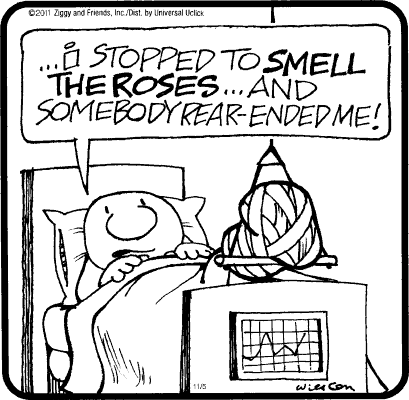 I was initially confused about how Ziggy managed to end up with a leg injury after being rear-ended, but then I thought, eh, probably there’s just one archetypical “injured Ziggy” template, with new dialogue swapped in as needed. Because the only thing sadder than the idea of millions of Ziggy fans laughing unaware at recycled panels is the idea of Ziggy panels being painstakingly created anew when the only payoff is yet another Ziggy comic.