Just think about what a rabbit hole of meta this strip is. Yes, it features a comic strip character complaining that “life already feels like too much of a comic strip”; but, when you think about it, when most people think about comic strips, they think about ones that have jokes and punchlines and such — not Mary Worth, in other words. Who would be the sort of person who would be more likely to use “comic strip” as a shorthand for soap opera strips, in which pointless people slowly live through plots that are simultaneously bland and ridiculous? Mary Worth, that’s who! Wheels within wheels, people.

When I read this comic, I snorted dismissively and said “Please, ‘that singer with the high-octave voice,’ why don’t they just say–” but then I realized that I don’t really know who in the current pop cultural landscape “that singer with the high-octave voice” would be. Apparently this is what it feels like to enter the Herb and Jamaal audience demographic. It doesn’t feel good, for the record. 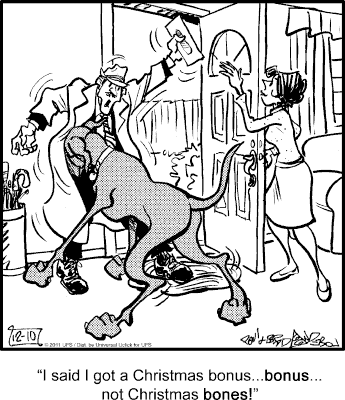 Marmaduke’s owner manages to hand his last-ever paycheck over to his wife as Marmaduke starts to tear through his flesh and gnaw on his tasty bones.

Side note: here is a thing I meant to pass on from faithful reader ChattyGenes: some comics collections about the aftermath of the tsunami and nuclear accidents in Japan. You should read them if you are interested in these subjects!