This would just be yet another Crankshaft in which the title character sits on the couch silently while the TV makes a terrible, terrible joke at him, if not for the carefully rendered expression of pure, incandescent rage on his face in that final panel. I mean, really, Crankshaft is always on the spectrum between dyspeptic and pissed off, but this looks like he’s finally snapped. It’s hard to say why, exactly — maybe he knows that he’s naughty and doesn’t want to be lumped in with the terrorists, maybe he’s insulted that the local news has stooped to this level of holiday jocularity, maybe he’s just finally worked out the grand conspiracy that everyone in the world is in on together, against him — but I’m assuming that he’s on the verge of filling his school bus with guns and ammunition and driving straight into a police station, just to see what’ll happen. 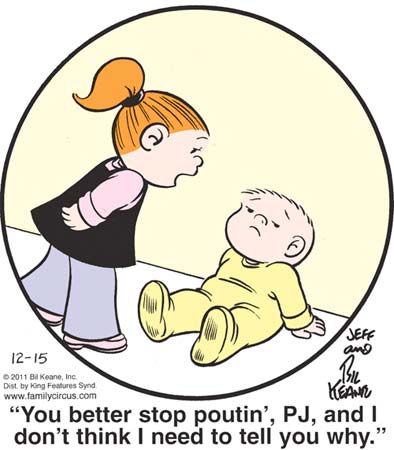 Dolly is playing here with the lyrics to “Santa Claus Is Coming To Town,” lyrics that, if you live in the United States and have left your house to enter a retail establishment of any sort in the past three weeks, I’m assuming you have running unbidden through your brain. Still, I kind of wish that the Family Circus scheduling computer had accidentally spat out this panel sometime in June. If you read it then, you’d probably assume that Dolly is just enforcing false joyfulness on general principles and has had enough of PJ’s sullen, rebel-without-a-cause attitude, because in this house we sit up straight and smile even if we’re not happy, mister.