So I’ve been pretty much ignoring this week’s Funky Winkerbean, which has been all about the crisis caused by the removal of the vending machines from the school, because, enh, vending machines. Really the only thing of interest so far has been the fact that everyone insists on calling the machines “vendos”, which ranks up with “solo car date” on the list of Formulations In Funky Winkerbean That Are Linguistically Probable But Nonetheless Never Uttered By Living English-Speaking Humans.

BUT! Today we learn that all the angst about this move is not just because everyone loves delicious vending machine food. No, it’s because, like all death-haunted citizens of the Funkyverse, the teachers and students at Westview wish that death would stop haunting them and just show up and take them away from their suffering once and for all. Too terrified to hurl themselves from a bridge or put a shotgun in their mouths or even take up smoking, they at least hope that each day is the day that a bag of sodium-laden chips triggers a massive stroke, after which would come blessed emptiness. But even rides on the carousel of death are now denied to them by their cruel creator.

Ha ha, it’s funny because Momma is an unlettered philistine! Or maybe she got a Kindle? Gah, who can tell, with this art. 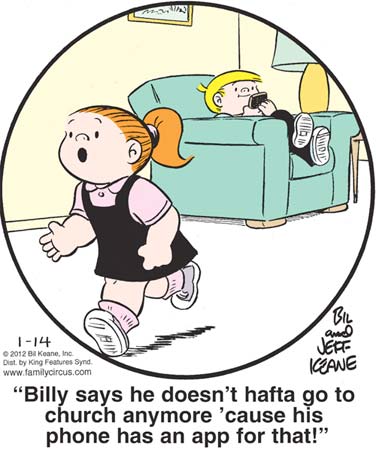 Now that the Keane Kids, previously Yahweh’s most loyal servants, have switched their allegiances, I guess it’s time for Him to hand over the rulership of creation to our new God, the iPhone.