By the way, I’m still totally enjoying the Gil Thorp teen tattoo plot, I don’t care what you think! The latest development is the strange alliance between the transparently gay Lini (who’s against tattoos because, ugh, so tacky) and the assertively Christian Cortez Beecher (who’s against tattoos because Leviticus 19:28). Anyway, if we’re going to have the gay teen saying “Heavens!” and wearing bowties constantly, probably because someone saw it on Glee once or something, I’m pleased at panel three’s revelation that they’re real bowties, not some pre-tied clip-on nonsense. And also I’m going to assume that’s an ironic “Heavens!”

Another fun fact from panel three: Tim Summers thinks that voting, military service, and legal adulthood in general are all nothing but a big pile of garbage. 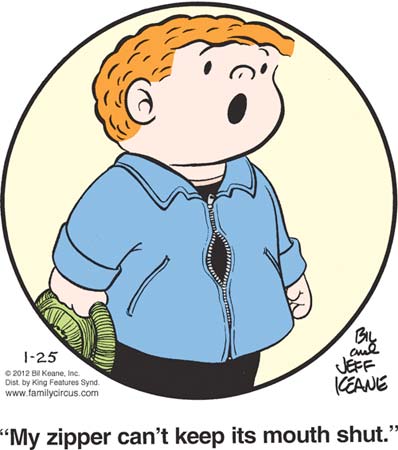 Oh, thanks, Jeffy! I had barely noticed your little zipper problem, but now that you’ve called it a “mouth” I can’t stop staring at it, since it looks exactly like a monstrous lamprey-maw leading directly to the infinite blackness of some unspeakable hell-dimension.

In other news, Lu Ann just told Margo to eat shit! Watch it Lu Ann, you just learned about your real biological parentage, but that doesn’t give you superpowers.