Aww, isn’t that sweet? Hootin’ Holler must be the most loving, romantic community on the entire planet. I say this because Barney Google and Snuffy Smith characters wag their tongues and roll their eyes constantly. Look, they’re wagging their tongues right there in the second panel, as they’re talking about people wagging their tongues! I’m glad to learn that these are symptoms of an overabundance of affection, as I had assumed that residents of Hootin’ Holler were just prone to seizures due to some combination of inbreeding and malnutrition.

As noted, the current run of newspaper Archie strips consists of reruns from the ’90s, which is fairly clear when you have it pointed out to you. But never let it be said that Archie Comics is simply digging out strips at random from its no doubt enormous archives (side note: I dearly hope that Archie Comics refers to its archives as “the Archie-ives”) and mails it out to the syndicate. No, first they have some entry-level employee make sure there aren’t any blatant anachronisms in the strip and quickly fix them. Fun game: what non-Glee TV show do you think Mr. Weatherbee was originally referring to in the third panel? I’ll bet its name is significantly longer than four letters! 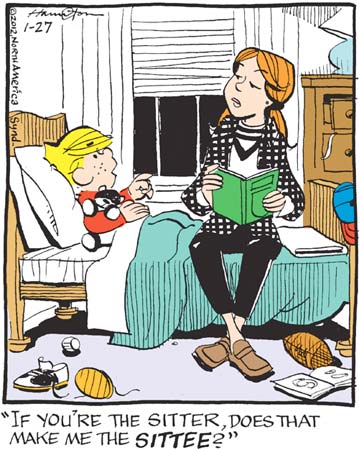 Dennis seems to think that his baby sitter will find his mastery of bound morphemes menacing! Sorry, Dennis, but this is not the case.