Sorry I haven’t been keeping you up to date on the spring storyline in Gil Thorp! (Or, for you Thorpophobes: Sorry I’m about to bring you up to date on the spring storyline in Gil Thorp!) The softball team has been roiled by a standoffish new girl who’s only standoffish to protect a mysterious secret (HER SECRET: she is a teen mom), which I’m sure will be wacky at some point in the future but right now it’s kind of enh. What drew my eye to today’s strip was the second panel. Most of us probably wouldn’t deem five vultures hovering menacingly over the baseball field a “good sign” for the season. My guess is that, having failed at coaching via conventional means, Gil and Coach Kaz have decided to study the ancient art of augury, which the Romans used to divine the future by studying the flight patterns of birds, in order to defeat their enemies and gain the favor of the gods. This will go great, up until the inevitable lawsuit from Americans United for the Separation of Pagan Temple and State.

Now here’s an interesting plot twist! This scene of Nola weeping disconsolately in public, pleasing though it is, surely isn’t the last we’re going to see of her; so why the sudden shift to Mary and Jeff (the latter in his sweet letterman jacket), sitting at home watching This Week In Disgraced Televangelists on the Schadenfreude Channel? Perhaps there’s a link between weeping Nola and her biblical-esque parable, failed monogamist Johnny Thomas, and these helpful words from Jesus from earlier this month? My guess: Nola and Johnny will find their way back to righteousness together, after they have illicit sex. 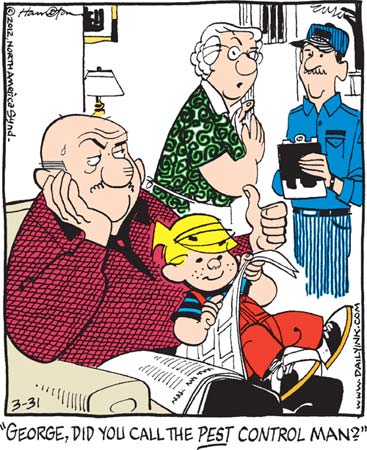 Mr. Wilson has finally decided to kill Dennis, with insecticide.