Let’s enjoy all the ways in which the dialogue in this strip serves to explain the plot and fails to mirror humans actually talk, shall we? “Why is Funky here?” may be the reader’s reaction to the strip’s title character’s sudden appearance, but that probably wouldn’t be the blunt, immediate response of Funky’s best friend’s teenage daughter (though we may give her some leeway due to general teenage sass and/or her justifiable disgust at Funky’s existence). Panel two is quite the doozy of exposition, though! One would of course assume that, having already packed her bags, Summer is well aware that she’s taking a class trip to Washington, D.C. And under normal circumstances one would also assume that she would have known for some time that her father and (future? did my mind maybe erase the elaborate Les-Cayla wedding, to protect me?) stepmother would be there making sure she wasn’t making out with random dudes in a secluded spot in the Jefferson Memorial or whatever. But maybe Les’s stratospheric self-regard led him to believe that his daughter would want to spend time with him on her trip, and thus this is supposed to be some special surprise for her? Les and Funky continue smirking smugly after Summer disabuses them of this notion, no doubt because they know from experience that the teenage years Summer is so eager to escape now will in retrospect be the least miserable time of her life. They know that in the Funkyverse the adulthood that Summer craves so much is really a long, bumpy road leading through pain to death. (The bumps in the road are tumors.) 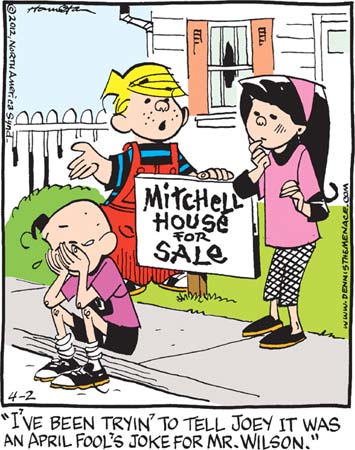 Since Joey’s illiteracy is I believe fairly well established in this strip, it seems uncharacteristically menacing for Dennis to have read him what’s scrawled on his prank-sign. Joey’s uncontrollable weeping at the thought of his only friend moving away seems about right, though, as does his inability to grasp the concept of an April Fool’s Joke after repeated explanations.