It’s really kind of sad that this fearsome, powerful wizard, heir to a long tradition of human beings who have managed to pierce through the barrier separating our mundane world from the realm of magic, having just used his unspeakable powers to bring a poor mortal back from the brink of death, feels a need to make a terrible and barely coherent joke relating to Apple’s electronic gizmos. It ought to be just as sad that cartoonists working on long-established strips that run in hundreds of newspapers around the world also feel the need to make terrible and barely coherent jokes relating to Apple’s electronic gizmos, but, you know, that ship sailed long ago, so it’s hard to feel more than just mild disgust about it at this point. 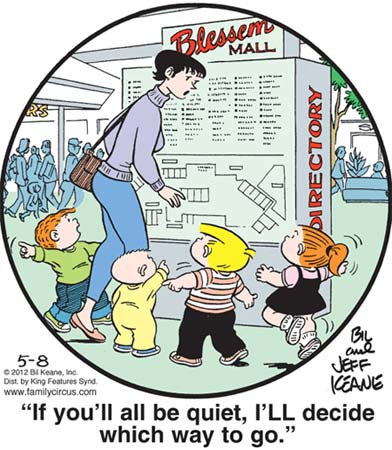 Aw, look at that, the name of the mall the Keanes have descended upon sounds like “Bless ’em all,” isn’t that nice? For my money there are not nearly enough mall/all puns out there in the world. For a while, when I lived in Oakland, there was this truck from Lavine’s Heating & Cooling that was often parked near my apartment that featured prominently the company’s URL, kingofthemall.com, meant, I assumed, to indicate that Lavine’s was King of Them All, with “them all” referring to all the HVAC contractors out there (or who knows, maybe it meant all of humanity, but the on-truck marketing copy didn’t seem that grandiose otherwise). I always saw that and thought “Boy, the King of the Mall must be pissed that he didn’t grab that URL when he had the chance.” Anyway, I’m curious as to whether an encounter with the horror of a litter of Keane Kids will make Blessem Mall’s management regret being so universal with their blessings.