“Never mind June being left at home to manage a sexy, charismatic, half-naked drunk lady,” you’re saying to yourself. “This strip needs to focus on its core strengths. Has Rex been a dick about anything lately?” Well, good of you to ask! You might recall that, right after the sadly departed Foster changed his will leaving everything (including $25,000 nobody knew he had) to Rex, he (supposedly) fell down the stairs while under the supervision of (estranged? ex-?) wife Mabel, who was not wise to this sudden will-change. There’s a couple of strange things going on here, and guess which one has been exercising Rex’s mind more? “You’re not implying that Mabel had anything to do with it!? Because if the police decide that she did, that might slow down the implementation of the directives in his will, and obviously nobody wants that!”

“Do you understand? I killed her!! And once I tasted blood, I couldn’t stop! My mother was the first of my many victims. And now I fear that my baby will start the cycle anew … with me. You have to help me maintain my position as Satan’s High Priestess of Death!” 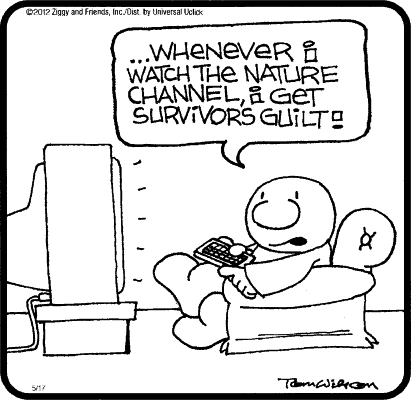 Congratulations, Ziggy: You have baffled me. The only scenarios I can wring out of this that make any sense at all are “Ziggy lives in a dystopian future when all forms of life other than people have been wiped out, and it makes him said to see the biodiverse glory that once was” or “Ziggy is watching a show about evolution and is the last survivor of a short, gnomish species of nonhuman primates.”

I’ve spent most of my life avoiding golf and golf courses at all costs, so I’m not really familiar with the social mores that prevail in those contexts. Is the sort of angry mob justice that’s looming in panel two typical, or is it just a strong but justified reaction to Crankshaft’s behavior and/or personality?