Wow, so the “Mary is summoned to Gina and Bobby’s surprise wedding, which goes off without a hitch” storyline lasted only three weeks, which has to be some kind of Shortest Mary Worth Storyline record. What could the point of it have been? Was it entertaining in and of itself, even by the fairly low standard of “entertainment” that we can expect from Mary Worth? No! Were we all desperate for closure on the “Gina and Bobby have been reunited and are 100% certifiably in love” plot? Most definitely not! But could their successful reunion and healthy emotional lives serve as a counterpoint to the misery and loneliness that will always afflict the sad and hilarious Weston clan? Now you’re talking!

I feel comfortable telling you (because you all know what a monster I am) that panel two of today’s strip — in which a shlubby, sad Wilbur, combover askew and chest hair on display, slouches away from his daughter, who begs an unfeeling God for mercy — prompted my biggest laugh from the comics so far this week. What might be the source of Dawn’s soul-wrenching sadness? I mean, based on Wilbur’s facial expression and the heartfelt nature of her cry, you’d think it was that Wilbur just told her that they’ve contracted father-daughter cancer and have only six agonizingly painful months to live, but probably it’s just that some boy was mean to her on Twitter. 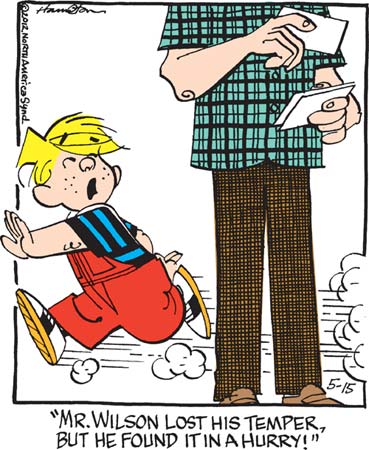 “Huh, a little boy running in terror from an enraged, violent adult? Enh, not my problem! I think I’ll just stand here trying to figure out what order to put these three blank index cards in.”

HELPFUL CRIME TIP: If you’ve been arrested for murder, and you absolutely must admit to an incident in which you physically assaulted the person who was later killed, try not to get a faraway look in your eye or let a little smile play on your lips, thus making it clear to all what a fond memory this is for you.