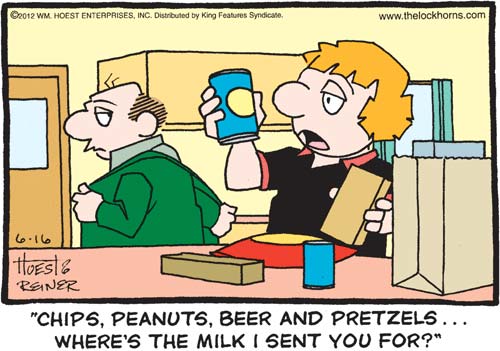 Congrats to Leroy on finding the most absolutely generic packages in the store! Let’s see, I’ll guess that the chips are in the bag, the peanuts are in the little flat box, the pretzels are in the long skinny box, and the beer is in the larger of the two cans? Because Leroy only bought one can of beer, maybe? Anyway, Loretta, don’t be so quick to judge, as we haven’t figured out what’s in the little can yet — it might be a single serving of milk.

I’m on the record as saying that Buzz, Shoe’s angry, confused elderly bird-man, is my favorite character in this strip, which is why I resent the fact that all the other bird-people have apparently abandoned him to just blather his nonsense in isolation. Couldn’t Roz at least put forth the effort of standing there nodding sullenly at his insane ramblings? He’s her most faithful, lowest tipping customer!

UPDATE: Apparently Biz’s name is actually Biz, rather than Buzz? I leave this up as is, as a mark of my shame at being unable to indentify cartoon birds!