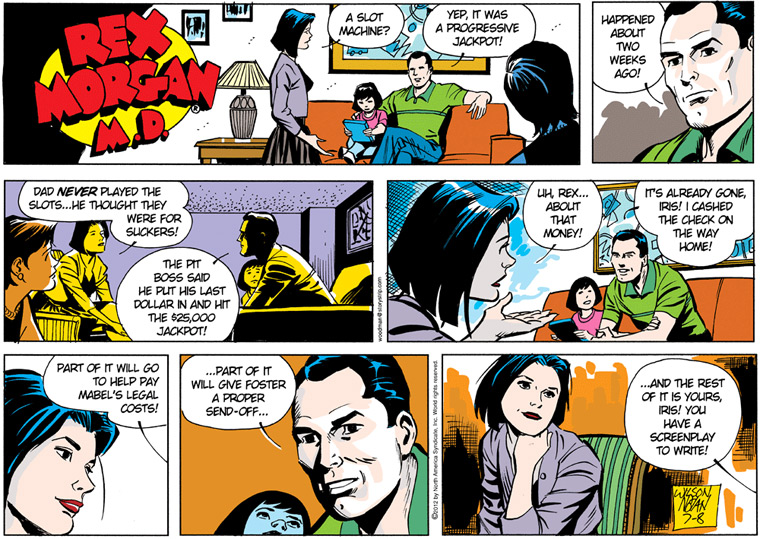 Ha ha, Rex, even when you’re sort of doing the right thing, you’re being a dick! I’d like to think that he let a long, unpleasant silent moment go by after saying “It’s already gone, Iris! I cashed it on the way home,” just so everyone could imagine what was coming next — “I bought $25,000 worth of wax for that powerboat that we were just randomly given three or four storylines back” — before finally admitting that he’s giving it back to Iris and Foster’s body, because honestly, what would Rex even do with a paltry five-figure sum, am I right? Nice of him to throw some money at Mabel so she isn’t bankrupted by the false criminal charges against her, but isn’t the reason she was so desperate about the money is that she’s been saddled with all of Foster’s old gambling debts? Too bad for her, Foster needs the fanciest coffin money can buy, and Iris needs to pay a guerrilla marketing agency to “build buzz” for her film script! Look, she’s already posing for her publicity photo.

Meanwhile, good job on everyone concerned for not considering the tax consequences here: A $25,000 inheritance would have been well below the threshold for the estate tax, but it’s high enough to trigger the gift tax, so some of that money’s going to Uncle Sam. Note that when I say “good job” I’m not being sarcastic. I’d much rather this money be spent on corn subsidies and sacrilegious art and flying death robots than on whatever any of these clowns have planned for it.

In these throwaway panels, Dennis may not actually be menacing, but at least he’s giving off a pretty menacing vibe. He’s practicing for true menace later on, like when he sassily responds to criticism by waggling a pistol or severed hand or something. 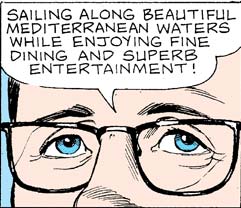 By popular demand, Mary Worth brings you “Wilbur Weston: The Total Immersive Experience.” Sadly, comics technology has not yet advanced to the point where you can smell him, so you’ll have to take our word for it that he’s redolent of scalp polish and ham.