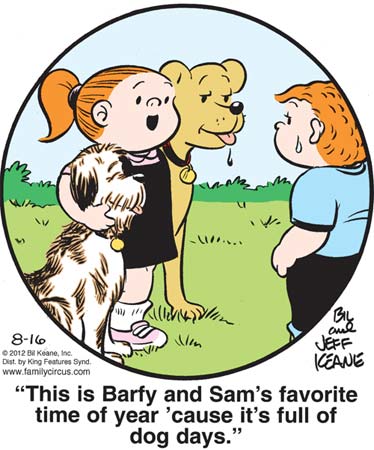 There’s something I find incredibly creepy about the two twin droplets of fluid in this panel — one of them dribbling from Barfy’s tongue, the other running down the side of Jeffy’s face. The similarity between the two seems to hold some hidden meaning, beyond just “This is what a drop of liquid looks like in a cartoon.” Perhaps the key is the unsettlingly knowing look that Barfy is giving Jeffy. The dog seems to be staring straight into the child’s eyes, and assuring him that the two of them are very much alike, that everything that Jeffy has feared and hoped his whole life is true: they may look different and one sweats while the other pants and they walk on different sets of limbs, but the two of them are a genuine pack. “Jeffy, I am your true brother,” Barfy says, in Jeffy’s mind. “These humans, they will never understand you, never love you, like I can. Come, let us run away together, off into the distance. Let’s go poop on somebody’s else’s lawn. You will know true freedom.”

I know I don’t cover Dick Tracy like I used to, but that’s because the new creative team has jettisoned the combination of head-scratching insanity and brutal violence that always drew me to it. Still, I do feel a need to point that they still know how to keep it real! Like, “nurse Dick back to health and then slowly drain his blood” real. 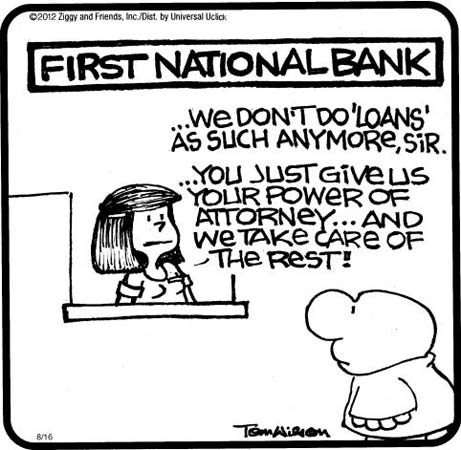 Haha, someone at Ziggy central sure has some kind of beef with the global financial system! Call me a tool of capitalism if you will, but can’t we all agree that Ziggy is clearly incompetent to run any aspects of his life and maybe his bank should be running his finances for him?

Never has so much entirely justified contempt for two whiny, hapless children been written so eloquently on a noseless, expressionless face.