My wife and I got married seven years ago this week, and we were together for three years before that, so yes, there is a certain amount of gas-passing that goes on in each other’s presence at this point in our relationship, and by “a certain amount” I mean “good lord it is a constant chemical warfare battle of the sort banned by the Geneva Conventions.” And yet I still have a certain amount of sympathy for what’s going on at the bottom left of the third panel. Walt’s just shoveling spoon after spoon of fart-fuel into his gaping maw, blithely assuring his son that someday he and his true love will be so confident in each other’s affections that they’ll go through life hand-in-hand, surrounded by an invisible self-generated cloud of noxious gas, their farts mingling and becoming one; but Connie’s face is a frozen mask, as she tries to hide the fact that her soul dies a little every time Walt toots audibly at the dinner table. I mean, there’s a bathroom right up the hall, you know? It even has a fan.

Well, it looks like Dawn is going to be living a more meaningful life, since she’s sure to imbue the fact that her new boyfriend (DO NOT DOUBT THAT HE WILL BE HER NEW BOYFRIEND) has but one arm with much more meaning than the situation deserves. (As about a million people pointed out in the comments, Jim’s disability was completely obvious in yesterday’s strip and yet I managed to not notice it at all, whoops.) Will Jim turn out to be a war hero, or even a semi-hero like Gil’s ex-student? Or is he just some guy who shouldn’t have reached so far into the garbage disposal? Whatever the case, we all know who the real hero is here: Wilbur, for inventing the Meat-Tart that Jim is enjoying with one-handed ease. 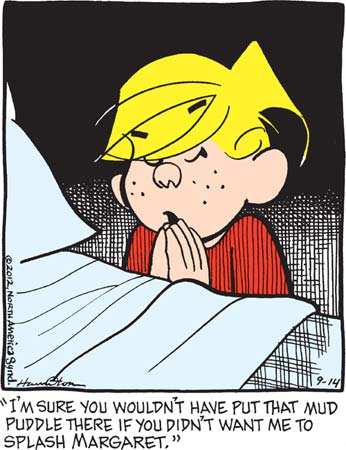 It appears that a shifty-eyed Dennis the Menace has decided on a new tactic in his war against society’s strictures: hard-line Calvinist theology. Isn’t the omnipotent God, who created the universe and predetermined our very ends before time began, the real menace here?

“Francis, you have 17 of your friends on ‘speed dial,’ despite the fact that your phone appears to be a rotary-dial bakelite model of the sort not produced in more than 25 years. Why? And, more importantly, How?”