OK, stay with me here. The “panic to keep the modern world at bay” is a bunch of pissy Llongo elders’ plan to undercut their hot queen’s rare-earth mining deal with a story about a vengeful immortal lioness who protects the tribe’s sacred land. The plan requires hardworking Llongo warriors to secretly release a captured lioness near the village, publicly kill her, privately dispose of the carcass, and then go find a matching replacement lioness — repeating the cycle to keep the “immortality” myth going until either they run out of lionesses or the queen relents and shuts down the mine.

The miners’ ace counterplan is to lock the corpse of the next-to-die lioness in a cage, confronting the tricksy elders with steamy, maggot-infested proof of their bad faith, and breaking the cycle. Despite the toll on the poor decomposing lioness, the Phantom is apparently cool with this, since he doesn’t want anybody horning in on his family’s own long-running “mammal-who-can-never-die” scam.

PS. To Wambesi terrorist and Phantom arch-nemesis Chatu “The Python”: before your next attempt on the Phantom’s life, buy a nice strong cage, and maybe some air freshener.

Despite appearances, this isn’t yet another tiresome “bullying is bad” lesson-comic. Boog’s helicopter mom Clovia smothers him in glurgy mash-notes and three-cupcake lunches to stupefy and fatten him into the image of his father, idiot-whale Slim Skinner. But these three young heroes will have none of it, bravely staging an intervention to keep their pal tough and slender.

Hey, grotesquely-drawn moppets gotta stick together, am I right?

Update — Boog’s mom is Hoogie, not Clovia, and Slim is his grandfather. Other than that, the story was accurate!

Did you know that tomorrow is Veterans Day in the U.S.? Snuffy Smith does! And he has every right to join that parade, since he not only shares the nickname of a genuine WWII Army hero, but served in the Army his ownself: 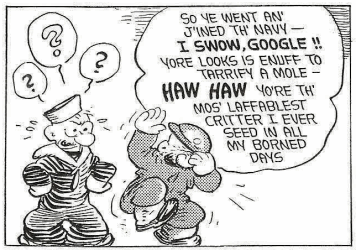 So what explains Snuffy’s descent from stalwart Defender of Democracy in the 1940’s to the shif’less no-‘count skonk we know and love today? The world’s longest-running case of PTSD? Bone laziness? My money, as always, is on the likker.

Hi there, I’m sitting in for Josh until Sunday, November 18th. You can contact me at uncle.lumpy@comcast.net to report any site or comment issues. You can still reach Josh at bio@jfruh.com, but expect sloth-related delays.