Since the early days of this blog, I have been complaining that the bird-people of Shoe refuse to fully acknowledge their avian natures. Today is a prominent example, in which two barfly bird-men (barbirds?) talk about birds that are hunted for sport, and then imagine a crazy, impossible world in which they were hunted, as if they weren’t birds, as if they weren’t delicious, as if their plumage wouldn’t look beautiful when draped over a taxidermy form. No, instead, the Perfesser just cracks wise about how at last call all the hot fellas are hunted, by the sexually voracious ladies, which, I hate to break it to you guys, but the lights are up and you two are the only ones in there, and nobody seems to be hunting you, for sex.

Your Uncle Lumpy has got me reading the Better Half, of all things, and I have to say that it’s … mildly interesting? It’s sort of like a distant relative of the Lockhorns, except instead of regarding each other with murderous contempt, Harriet and Stanley seem genuinely in love but also somewhat baffled by each other, and indeed by the world at large. Nothing in the gentle marital foible-themed cartoons I’d read up till today had prepared me for this nightmare, of course. Stanley’s enthusiasm over the fact that his corpse will someday break down to its organic components (if the flesh isn’t first torn off by scavengers) can be written off as eccentric, if unsettling; but once we see him rambling angrily about about great heaps of discarded, beautiful human faces mouldering in dumpsters all over Hollywood, we know that something very, very wrong is going on inside his tiny cranium. 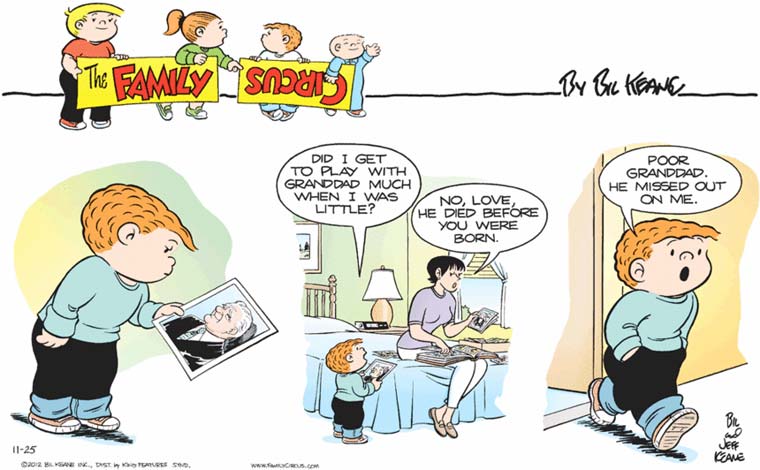 The innumerable dead are not thankful for much, but they are thankful for this: they have been spared knowledge of Jeffy.