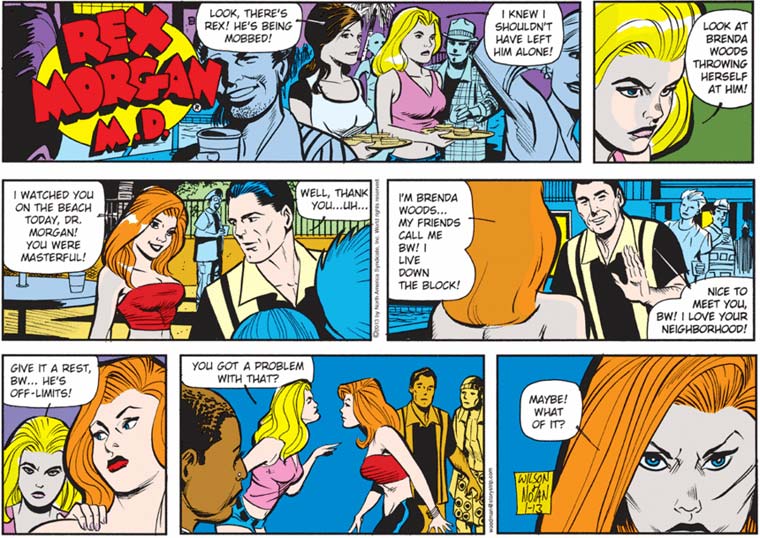 I do really wonder at the plot development process that brought us a Rex Morgan, M.D., storyline that includes a sensitive treatment of breast cancer and its medical, economic, and psychological effects on people without health insurance, but also features sexy strippers getting into a cat fight over Rex. Was it conceived of as a single, organic whole, appearing as a creative vision in the writer’s mind? Is it the result of some synthesis, the product of a debate external (e.g., desperate stakeholders with conflicting visions arguing in a boardroom) or internal (e.g., a devil on the writer’s shoulder shouting “STRIPPERS!” and an angel shouting “CANCER!”)? Whatever got us here, it’s pretty great.

Two things in particular I’m fascinated by today are the waistline of BW’s pants, which seems to improbably dip down in the front to better showcase her washboard abs, and her nickname. I guess it’s pronounced “Bee Doubleyou,” but that doesn’t have any fewer syllables and is more awkward to pronounce than “Brenda Woods.” Plus the lack of periods when it’s written out seems a little odd. Is she maybe saying “Bwuh”?

“So it’s much more dramatically interesting this way than if he were, say, defeated by a super-hero, right? Everybody likes it better this way, right? So, um, that was my plan all along?”