Could Dr. Jeff’s instincts about Mary’s platonic male cake-making partner have been right? If John’s really just a widowed amateur cakemaker, looking to win a contest and break into this high-pressure, rewarding world, then why is he rubbing his hands together and sneering like a supervillain in panel two? “I want to show you my design, Mary … it’s a giant laser, made entirely out of cake, and capable of destroying a city with a push of a button! Who’s just some retired innkeeper with a dumb William Powell mustache now, eh? Eh? MOO HA HA HA HA!” 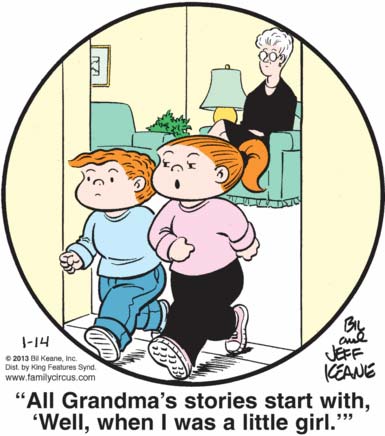 Good lord, this is one of the saddest Family Circuses I’ve ever seen. Dolly and Jeffy’s purposeful stride, Dolly’s narrowed eyes, and Grandma’s stricken expression pretty much make it clear that the Keane Kids simply walked out on their grandmother in mid-anecdote. “We get, it, Grandma, things were different when you were our age. How about telling us what things were like when you were old enough to be interesting but not old enough to be boring? What were the cool drugs? What famous dudes did you mess around with? Did you ever stab a man in self-defense, or for fun? We’ll be in the other room, watching TV and picking our noses, any time you want to come and get real with the reminiscing.”

Notice the contrast between Shoe and the Perfesser’s reactions in panel two. Shoe displays this strip’s Trademark Goggle Eyes Of Horror at hearing that Roz holds no strong opinion about a feature in his newspaper. He’s genuinely shocked that a citizen isn’t interested in the opportunity to make her opinions known to the world. The Perfesser, meanwhile, maintains his soul-numbed, heavy-lidded expression. He knows he works for a second-rate publication that’s part of a dying industry. He knows nobody cares about what he does and that once he dies his life’s body of work will be instantly forgotten. This is what the world has to offer. It is what he has come to expect.

A metaphor for our fallen nation: now that “Lake Freedom” has been drained, we need some kind of elitist college professor just explain to us how to open a metal box. CAN YOU HEAR THE EAGLES WEEPING?