Your comment of the week coming shortly (and yes, I know I’m RIDICULOUSLY early today), but first: comics superstar Julia Wertz is also an abandoned-building-exploring superstar, and she spotted this decaying bit of newspaper from the ’60s on the floor of the projection booth in an old theater. Check out who’s there! 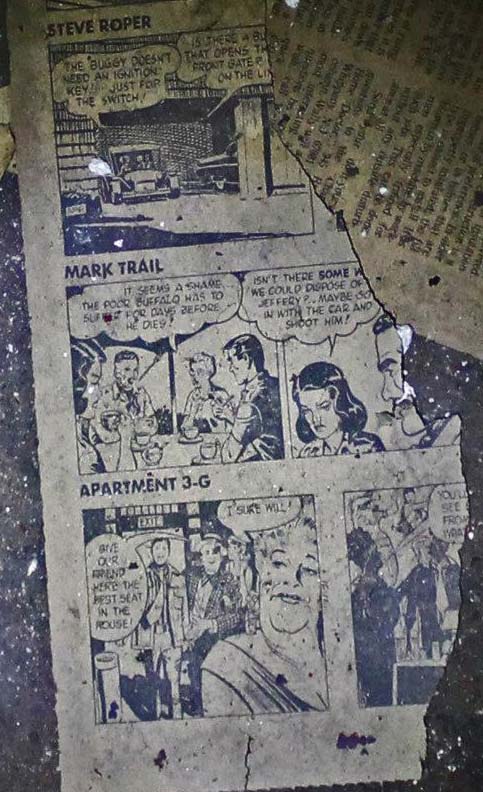 Yes, it’s a very special episode of Mark Trail, in which he and his friends decide to euthanize a buffalo, with a shotgun.

Anyway! In the here and now, here’s your comment … of the week!

“‘Our Becky? I mean — my Becky?’ Alas, Rufus and Joel were having Becky in common with nary a care in the world, but now the threat of monogamy has allowed jealousy to rear its ugly head. In keeping with its usual value system, Gasoline Alley gives us the important moral: bestiality is fine; fight the real enemy: Marriage.” –Sock Puppet

“Note the smirk in Darrin’s face as he shovels. He knows it’s killing the old man. He knows.” –Freakin Hemingwad

“Don’t interpret this strip in such a negative way! Maybe look on the bright side of things and hope that FW is setting us up for some Hitchcock style Rear Window suspense. That would then mean someone in the Funkyverse is going to get murdered! That’s good news, see?” –Chareth Cutestory

“Pluggers know that subject-verb agreement is only for smug elitists with their fancy ‘basic education.'” –Meg

“It’s me, Claire! Don’t sugarcoat it. I want a chocolate shell around a nougatty center!” –Dood

“Of course Dill’s team won. Did you see what those other cakes looked like? They did not represent nature in any way whatsoever.” –Liam

“In case you were wondering how well Newspaper Spider-Man’s powers work, a blind man with normal human strength just threw sort of a stiff-arm in the midst of an uncharacteristic freak-out, and Spidey blindly swung into it with such force that he’s apparently broken some ribs, lost his grip on his webline if that’s possible, and is suffering from full-body convulsions as he plummets to his doom, all the while asking, ‘?'” –Doctor Handsome

“Am I a freak for thinking the A3G storyline is kind of exciting right now? I am on the edge of my seat waiting to find out whether the fire was intentional or an accident, and what will be Evan’s fate. I should probably get some nice cushiony diapers because with the pace of this strip I will be on that seat edge for a very long time.” –Currer Bell

“Most people would take a minute to say something like, ‘What an asshole!’ or ‘What do people in San Francisco have against calling it Frisco?’ or ‘Why does my wife fall asleep every time I call her?’ But not Peter Parker. There’s Something Wrong and he’s going to find out what it is, if it kills him. I’d suggest starting with therapy.” –The Right Venerable Pasdordan

“It’s funny because Dagwood is getting his news from a newspaper while wearing a bow tie at the breakfast table, and it’s 2013.” –Squeak

“Does the fact that Becky appears to be sentient and to understand human language make this better or worse?” –junk science

“Let me go out on a limb here and suggest that Rusty’s camera holds evidence of Rod Bassy’s nefarious plot to win the fishing tournament by having his morally bankrupt sidekick attach genetically-enhanced farm-raised record-sized bass to Rod Bassy’s patented Rod Bassy Lite-Up Serial-Killer Bass Lure using the remote control midget submarine secreted in The Rod Bassy Serial Killer van when not in use. Either that, or pictures of goats humping.” –flatsixes

“I’m sure that image of Dill and Mary Worth standing in front of a star field in space is how Kubrick wanted to end 2001. Sadly, the studio told him to ‘be less weird, Stan.'” –Voshkod

“Oh, sure. That’s ALWAYS been Crock’s problem. Too MANY jokes.” –Daniel