I don’t expect any of you to understand what’s happening in this strip, seeing as I read the Phantom daily and can barely tell you what’s going on. But I am super charmed by the fact that pilot Ted West (who is flying jet airplanes for drug dealers, I think?) has a card in his wallet with a picture of an old-timey balloon on it where he refers to himself as an “aviation professional.” I guess sinister African drug lords really appreciate whimsy!

Say, remember when Sophie was a lilac pantsuit wearing spookily adult-like child-nerd, but then cheerleaders were mean to her and so she decided to become a cheerleader, as revenge? Well, as Uncle Lumpy once demonstrated, strip time flows extremely slowly in the Parkerverse, but that all happened like four or five years ago in real time, so we’re pretty much right on schedule for her to have flowered into a designer sunglasses-wearing, road-raging mean girl. I love Sam’s “OH MY GOD WHAT HAVE I CREATED” look in panel three. 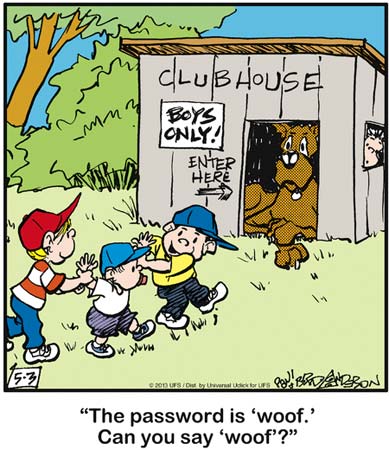 Aww, isn’t that cute! These kids think that if they find a little toddler and sacrifice him to Marmaduke, he won’t devour them too! (He is totally going to devour them.)