Sorry for not keeping you up to date on what’s up in Mark Trail! The short version is that Mark and Wes flew off to go look at some sheep but then they crashed and Wes broke his foot and now they’re trapped and will no doubt resort to cannibalism soon enough. That leaves the ladies to chill back at the campsite! Don’t panic, Shelly, those wolves are perfectly harmless, not like the villainous wolves of several storylines ago. You should be more concerned about this mysterious pink mist that’s rising out of the river and filling up your tent and campsite, quite honestly. Is a mid-’80s glam-metal concert about to break out?

Sorry for not keeping you up to date on what’s up in Dick Tracy! The new creative team has been pretty relentless in bringing back characters and plotlines from the strip’s storied past, and are now apparently moving on to the extremely wacky late ’60s period where Dick went to the moon repeatedly and Mysta, the daughter of the Governor of the Moon (no, really), married Dick’s son. Later she was blown up by by a car bomb, but now has apparently been … “recreated”? Except for her face? Whatever, any excuse to have a character say “No! I’ve had enough of your world! I want to take my family to my real home. Back on the moon!” is a good excuse as far as I’m concerned.

I’m a pretty big dummy about military stuff but there isn’t a single vehicle in the U.S. arsenal, past or present, that looks remotely like whatever Beetle and Plato are driving, right? Like, a mid-sized hatchback with big tires and double gun turret on top and some other guns randomly sticking out windows? That’s not a thing, right? Also, this town probably doesn’t have any trouble with parking because it appears to be one vast, featureless parking lot, though predictably it does have a lot of trouble with traffic flow. 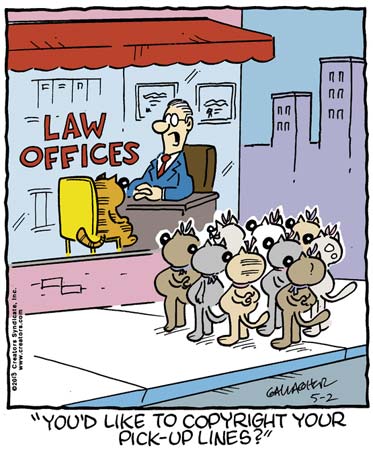 So Heathcliff’s “pickup lines” are so effective that he has nine lady cats following him around in a neat formation, waiting in still, eerie silence for him to sex them up, individually or perhaps together? I’m not sure what it would take to make this joke funny, but adding a whole bit where he asks a lawyer for intellectual property advice isn’t it.

Just leaving this here to remind you that Les’s creative endeavors have failed humiliatingly before, so there’s hope that they will again! Actually, the success of Lisa’s Story must gall Jessica more than it does the rest of us. “Hey, sorry my book about your dead dad was a flop! Did you hear that my book about my dead wife was a big success? I guess we know whose dead relative is better, huh?”