Haw haw, that Snuffy sure is a notorious lazybones and/or narcoleptic! And … there was a TV program, or maybe a local news broadcast, that showed Snuffy asleep? Or perhaps he curled up for a nap atop Hootin’ Holler’s only television set? The second panel would’ve been a good opportunity to cut to a depiction of Snuffy that might clarify the sense of the joke, but sure, just show these two guys laffin’ it up, that’ll work too. 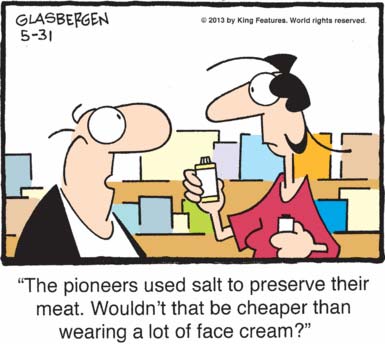 Fellas, I don’t pretend to be a “relationship expert,” but I do know one thing: under no circumstances should you imply that your wife’s face is a putrefying flesh-mask of rotting meat