Well, all’s well that ended well for Mark and Cherry and Wes and Shelly! Someday Wes will be able to put weight on his inexpertly set ankle again, Cherry only got lightly mauled by a bear, and probably no more than a few hundred acres of protected forest went up in flames when the gang’s propane tank blew up. It was all worth it, though, if the end result was the final panel: Shelly weeping tears of glorious relief at being within range of a delicious, life-affirming cell phone connection one more.

Marvin’s dad, meanwhile, has encountered kindness in the form of an invitation from a co-worker whose existence is not defined by catering to a squalling, pooping hell-infant. He appears to have gone into shock as a result. Presumably the tears of relief will come later. 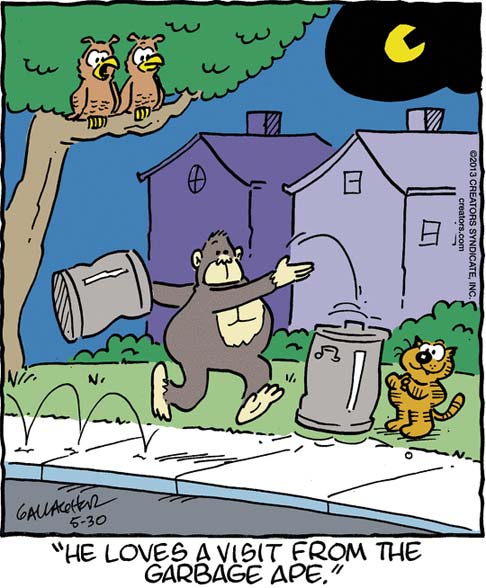 At first, I thought that the government of Heathcliff’s town had broken the sanitation workers’ union and replaced them all with non-human primates, but then I realized that this ape is apparently … delivering garbage cans? As described by talking owls? Anyway, this has been your daily installment in the Chronicles Of Heathcliff’s Descent Into Total Madness.