The dreary Gil Thorp spring storyline continues to plod along, with lawyer-spawn/aspiring lawyer Knox Foley (aka “Foley Knox,” aka “How am I supposed to keep track of which is your first name and which is your last name when they both look like last names”) still at the fore. His latest legal shenanigan: trying to convince his aspirational lady love that she should sue the grocery store where she fell and broke her wrist and UGH I can’t even work up the energy to make a joke about this. Mostly I want to point out Foley’s huge hand flopping around in the middle of panel three, like we’re playing in a first-person shooter video game except it’s not a first-person shooter, it’s a first-person poker or grabber or something. Giant meaty freak-hands have been the defining visual element of Gil Thorp since artist Rod Whigham took over in 2008, so it’s great to see a Thorp-flipper literally front and center here, and I wouldn’t be sad if every subsequent panel followed suit.

Less well known to Beetle Bailey regulars than “Miss Buxley Wednesday” is “The Halftracks loathe each other Saturday,” which today seems to be happening on Tuesday for some reason, maybe because we’ve crossed some sort of nuclear threshold of mutual hatred. Haha, it’s funny because General Halftrack is at the bar drunkenly boasting to his friends that he’s going to leave his wife! His wife is back home, stone cold sober, boasting to nobody in particular that she’s going to leave her husband, and it’s terrifying. 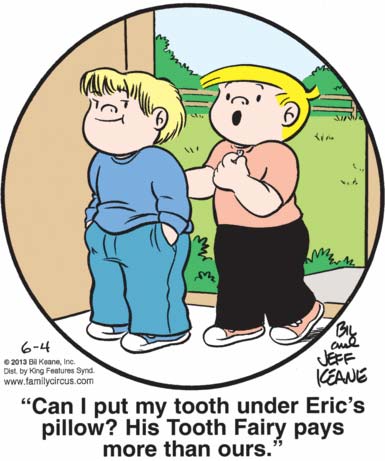 Oh, man, just look at this guy! Billy’s pretty good at being smug, but this kid’s the master. “Teach me how to be like you, Eric! If I exude epic levels of self-satisfaction, will the ‘law of attraction’ bring me all the tooth-related revenues I deserve?”