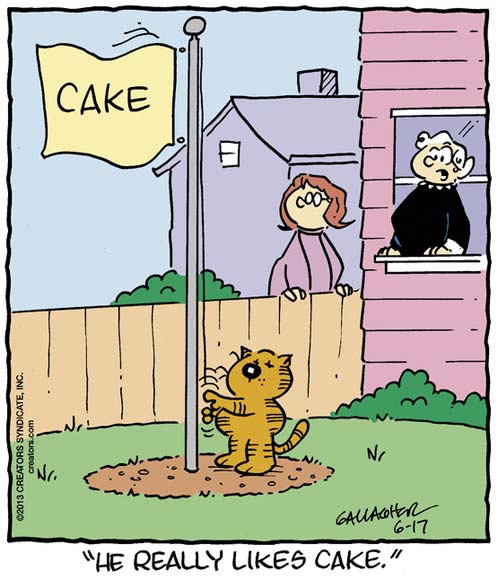 Lots of people like cake, you know. Really like cake. Very few of them use this like of cake as the ideological basis for an independent cake-empire, which declares its separation from the insufficiently cake-worshipping polity to which it previous owed allegiance and then presumably goes on to aggressively impose cake-adoration on its unwilling neighbors. Heathcliff, as ever, does not do anything by half measures.

Oh, goodie, it’s been months since Crankshaft journeyed to New York to make vaguely New York-themed puns! But first, in today’s third panel, we’re treated to the precise moment when Pam gives up on trying to make her dad love her.

“With the Kingpin in custody” is kind of an obscure way to say “Now that we’ve finished having surreptitious beach-sex, let’s talk loudly and ostentatiously about our supposed romantic entanglements with women,” but I don’t want to tell you guys how to live your lives.