Wizard of Id doesn’t go in for meticulously researched historical detail like Prince Valiant or whatever, but usually its strips include its pseudo-historical characters in its faux-medieval milieu, or at least people who might be plausibly presented as existing in said faux-medieval milieu, even if there are also jokey non-medieval angles to the gag. But today all of the strip’s 49 years of accumulated baggage has been cast aside so that we can enjoy this entirely contemporary joke. Not that it isn’t worth it, obviously, since the punchline is so original, so groundbreaking, that once it had been conceived of it would have been a literal crime against humanity to give it anything but the widest publication possible. (It’s about how kids today use computers instead of magazines, you see, and also about how the magazines in doctors’ offices are generally quite old.) 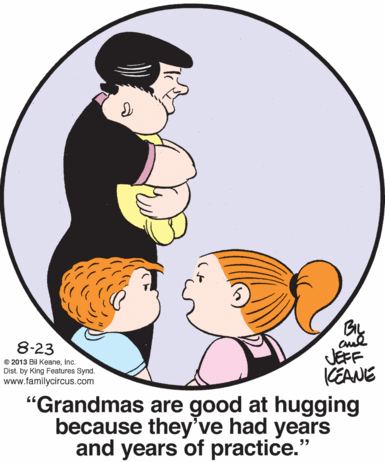 Remember, old people aren’t better at hugging because their age and wisdom have opened their hearts more fully to the possibility of loving other human beings without judgement or fear. They’ve just done it more than you have! Have you ever been hugged by a child? It was awful, right? They’re terrible at it. They need more practice.