I have to admit I’m having a hard time getting a read on Judge Parker Senior’s expression in panel two, as he realizes that the concierge at the cruise ship’s business center isn’t just someone who passed some very basic training courses on using Microsoft Word and rebooting the Wi-Fi router, but is actually a gifted screenwriter who is ready to do all the work of adapting his novel for him. Is he having a Sarah Morgan-style epiphany about the emptiness of a life where everything is just handed to him? Or is it more a case of “Yeeeessss, labor is being done for me, as is my due”?

See, this is just more proof that Mark is a class act all the way. Sure, he might be forced by circumstances and your own villainy to knock you unconscious by kicking you in the face, but once you’re out he’ll be sure to gently lay your head on a cushy pillow of otter pelts. Or is that a cushy pillow of chilled otter carcasses? Either way, he’s nice, and isn’t afraid of a dead otter. 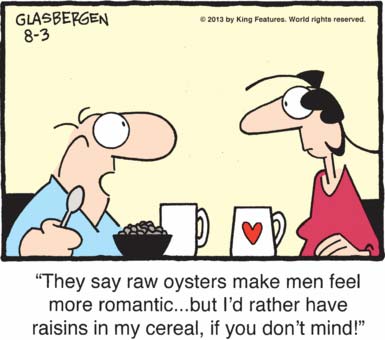 Harriet is trying to get Stanley riled up for sex, and since this is the Better Half she’s doing it in a really weird and gross way.