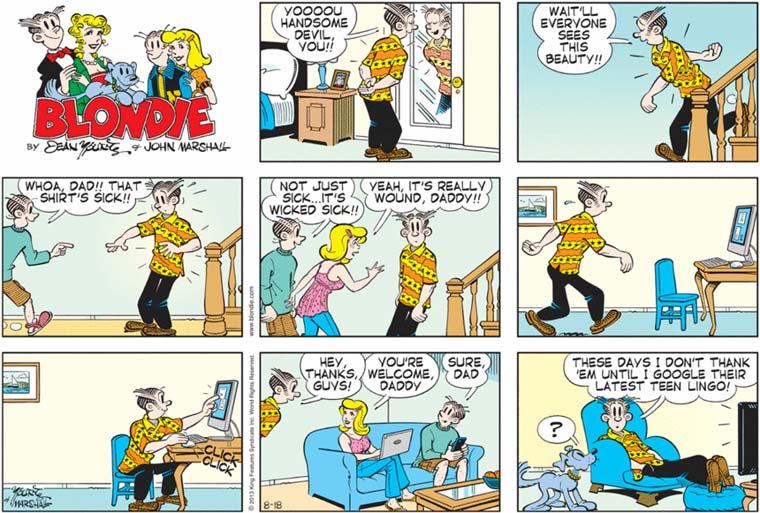 Having recently turned 39, an age significantly closer to Dagwood’s vaguely defined middle age than to Alexander and Cookie’s vaguely defined teenagerhood, I too struggle with the kids today and their lingo, and sometimes have difficulty distinguishing between actual teenspeak and things that comics creators who are even older than me think might be teenspeak, in some teen subculture somewhere. For instance, “sick” and “wicked sick” are slang synonyms for “good” and “very good” of such long standing that even I recognized them right away. “Wound” is another matter, though, one not helped by the fact that it’s not clear in writing whether it’s meant to rhyme with “pound” or “spooned.” I certainly hope it’s the latter and that some misguided sixtysomething Blondie gag writer came to the conclusion that “Well if being sick is cool, then being wounded must be super cool!” 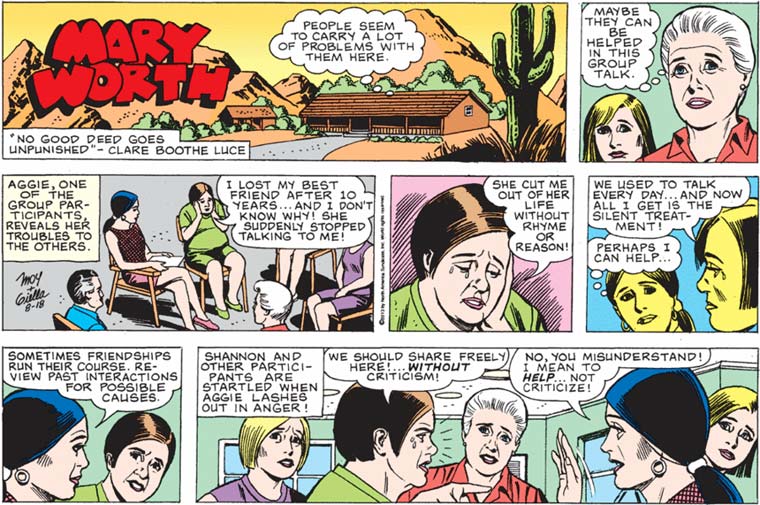 Oh no! The talk group has gone dangerously awry! The participants may be emotionally fragile, but they recognize an alien robot spy wearing a human meatsack disguise when they see/hear one. “SOMETIMES FRIENDSHIPS RUN THEIR COURSE,” said the carefully constructed Homo sapiens emulation module. “REVIEW PAST INTERACTIONS FOR POSSIBLE CAUSES. HALT! BELAY AGGRESSIVE POSTURE! A SEMANTIC COMPREHENSION MISMATCH HAS OCCURRED! PREVIOUS SENTENCES WERE INTENDED AS HELPFUL SUGGESTIONS, NOT AS ATTACKS ON SENSE OF SELF! RECALIBRATING … RECALIBRATING …”