Sorry I haven’t been keeping you up to date on eleven riveting days of vague worries about Shannon’s job, but here, let me sum them up for you: ever since Shannon enraged Aggie during a talk group, she’s been worried that Aggie will complain and get her fired — despite the fact that we’ve seen no evidence that she’s getting pressure from her bosses, or that she would be at all expected to be some kind of qualified talk-group leader, since she was first introduced to us as the teacher for Mary’s yoga class. Being a yoga teacher and being a therapist are not the same things, just for the record!

But anyway, Mary is determined to save Shannon’s job by any means necessary. Those means apparently include undermining the ontological structures that define the very nature of reality for the managers of Pax Wellness Resort. “Those policies that you think you have, that say the customer is always right? Those policies are false. They do not exist. Everywhere in the handbook where you see it written is a lie. Avert your eyes from it and blot it out with the darkest ink, lest your mind become unclean with falsehood.”

Why has it been so long since the Mudlarks have won a championship in any sport? Maybe it has something to do with Gil and Kaz’s scouting techniques, which seem to consist of wandering the school’s corridors at random looking for big dudes. Today’s strip reminds one of 1 Samuel 9, when the prophet Samuel spots Saul son of Abiel — “From his shoulders and upward he was higher than any of the people” — and immediately hears the word of the LORD in his ear instructing him to anoint the man Israel’s first king. That ended up working out super for everyone concerned, so surely this mysterious hulking shadow will do great on the offensive line or whatever. 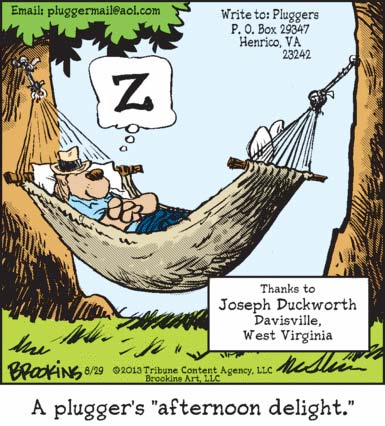 We simply cannot emphasize enough that pluggers are wholly uninterested in sex.