THANK GOODNESS SHANNON ISN’T GOING TO BE FIRED!!! It seemed that the odds were stacked against her, with the only sliver of hope she had to hold onto being the fact that any threat to her job seemed existed only in her and Mary’s panicked imaginations. My guess is that Aggie only got all this sweet free stuff because Shannon went to beg desperately for her job and her boss, in between the heaving sobs, managed to discern that maybe one of the customers got bent out of shape about dumb crap, let’s waive their bill or something, ugh, get this crying lady out of here, fine, fine, you can keep your job, whatever, just go.

“They’ll most likely caution participants that sharing at open talks may lead to feedback!” is probably the most hilarious sentence you’ll read for the entire month of September, by the way. 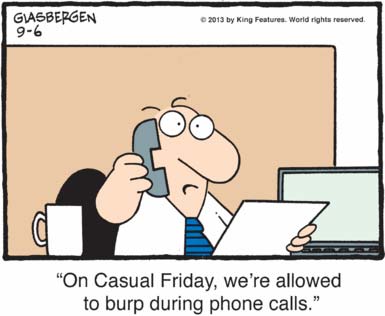 The thing I like about this strip is that Stanley is wearing a shirt and tie, which means that it isn’t casual Friday at all, and he’s desperately improvising to excuse whatever horrifying biological noise he just unleashed on the poor client on the other end of the line. This seems much, much more like something you’d get fired for than for providing feedback to someone sharing at open talk.

Today’s strip will be Exhibit A in Mary’s multimillion dollar “conspiracy to create a hostile work environment” lawsuit against the school district.